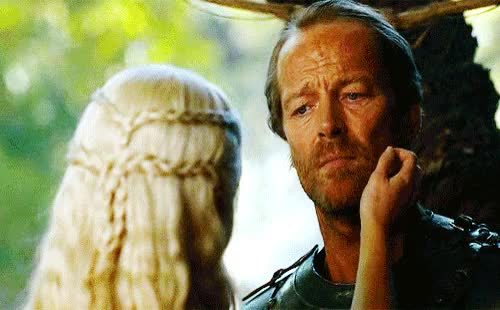 In a positively brutal case of life imitating art, it turns out Iain Glen, who plays the friendzoned Jorah Mormont in Game of Thrones, had the same thing happen to him by Emilia Clarke AKA Khaleesi in real life.

This clip right here says it all:

Jorah Mormont got put in the friend zone in real life too. @LightsCameraPod pic.twitter.com/cApcNIbSzU

Probably the most devastating “mah buddy” in history – ouch:

Gut-wrenching stuff. Very difficult to watch. It looks like they were filming some kind of behind-the-scenes documentary and Iain Glen is in there being super sincere and bigging up Emilia Clarke to the max, meanwhile all she can talk about is how much of a good buddy he is.

This is a guy who’s had to watch her get banged out by Khal Drogo, Daario Naharis, and very possibly her own nephew Jon Snow in the upcoming final season. Jorah has been with Khaleesi every step of the way, basically gone to hell and back for her, and now he won’t even get to hook up with her on-screen let alone IRL. Just a brutal case of friendzoning if there ever was one.

Think about all the co-stars in film and TV history who ended up together – no such luck for Iain Glen and Emilia Clarke. Friendzoned on-screen and off-screen too. Can’t feel too bad for him though, probably gets loads of babes in real life. Just not Emilia Clarke. Oh well, can’t win ’em all.

To meet Khaleesi’s 18-year-old body double who will be out of work soon, click HERE.