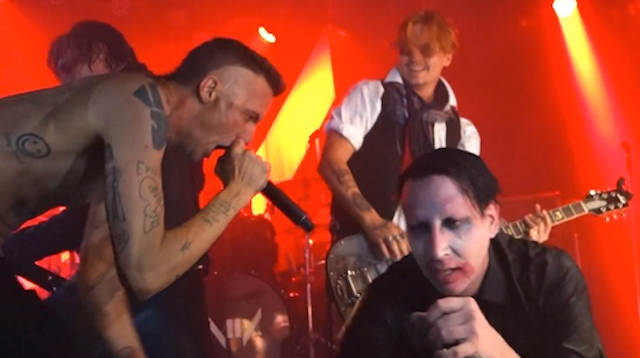 Who would have thought that these guys were buddies?

You probably wouldn’t expect Marilyn Manson and Johnny Depp to be friends – it’s not like they share the same surname like Marilyn and Charles or anything –  but for some reason it seems like they are and Depp likes nothing more than joining his buddy on stage to perform The Beautiful People at his special Halloween show at the Roxy in Hollywood. Sure, Ninja from Die Antwoord is there too but it’s not exactly that surprising that Marilyn Manson and him would be friends, is it?

Apparently Manson and Depp are friends because they’ve recorded some songs together in the past (which I probably need to find immediately) and really hit it off. I suppose they just thought it would really pump people up if they all sang the song together and guess what, they were right because everyone seems to be losing their shit in the video. Happy Halloween, although it’s kind of a shame that Marilyn Manson is really fat these days and can’t really sing properly.