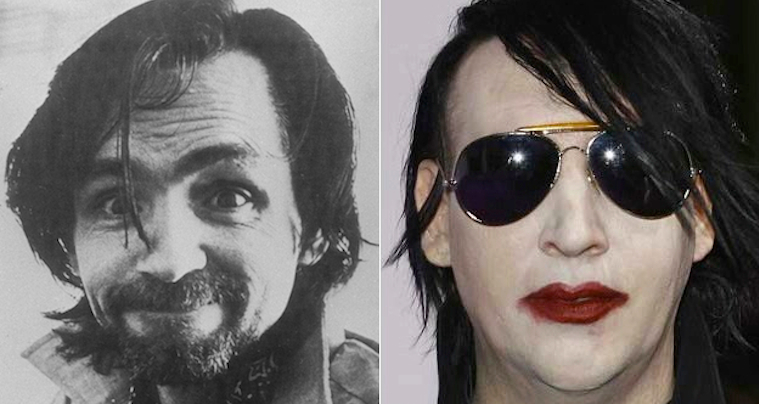 Marilyn Manson’s inspiration finally catches up with him as serial killer Charles Manson gets in contact via a mysterious and really weird letter.

This is really weird. Aside from the fact that a serial killer is sending a rock/goth superstar a letter, the content is even weirder and makes no sense. Anyway, in case you didn’t know (and I actually didn’t) Marilyn Manson got his name from combining the names of Marilyn Monroe and Charles Manson. Edgy huh?

I can’t believe I never heard that before – I mean I’m not exactly a Marilyn Manson fan but I do have one record (Holy Wood or something I think? The one with Fight Song on?) and I did seem him play at Reading Festival once (boring except when he sang a song on stilts) but I figured from all the exposure he got in Kerrang when I was a kid I would have read that at least once, or maybe even figured it out. Everyone else in his band does it as well, hence Twiggy Ramirez, Ginger Fish and Madonna Wayne Gacy. Super cool/goth/edgy.

Anyway it seems that Charles Manson doesn’t really like the fact that Marilyn Manson has become a famous goth rocker on the back of his name (in case you didn’t know Marilyn Manson’s real name is Brian Warner – like anyone was going to take him seriously with a name like that) and has decided to write him an open letter from his prison cell about the issue. At least I think that’s what it’s about. The letter doesn’t really make any sense at all and kinda reads like a Harmony Korine movie or something. I think it’s meant to be vaguely threatening but I doubt Marilyn Manson/Brian Warner is worrying about that too much considering he’s on tour with Rob Zombie – another badass – at the moment and Charles Manson is sitting in a cell somewhere counting down the days until he dies.

Still, it’s kinda creepy but you kinda get the idea that Charles Manson is so bored in jail he probably just sat there drafting and redrafting the letter until it was as nonsensical and weird as possible. I mean it doesn’t really make sense for him to be sending Marilyn Manson a letter now, when he’s been washed up for about 7 years and the only explanation that I can think of to explain this is that it’s actually taken him ten years or so to construct the letter. It’s that weird that this actually is possible. Anyway, check out the full text below and if you’ve got any idea what the hell it means be sure to let us know:

It’s taken me a long time to get there from where I could touch M. Manson. Now I got a card to play — you may look into my non-profit, ATWA, and give Manson what you think he’s got coming for Air, Trees, Water, and you. Or I will pay Manson what you think Manson got coming — the music has make Manson into Abraxas Devil, and I’m SURE you would want some of what I got from what I got. It’s a far out balance. Beyond good and bad, right, wrong. What you don’t do is what I will do — what you did a sing-along, and let it roll and said how you saved me a lot of steps — I don’t need, it’s not a need or a want. Couped — coup. Ghost dancers slay together and you’re just in my grave Sunstroker Corona-coronas-coronae — you seen me from under with it all standing on me. That’s 2 dump trucks — doing the same as CMF 000007.

Er what?! Here’s a picture of the original note too: 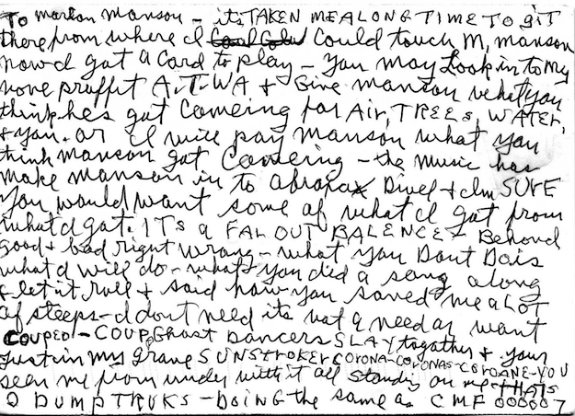