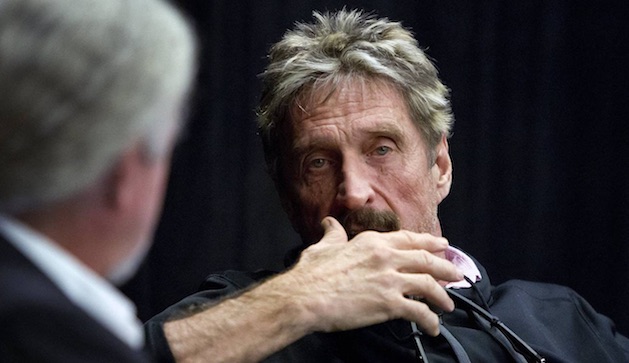 John McAfee was found hanged in his Spanish jail cell yesterday and already conspiracy theorists are circling his death claiming that he didn’t commit suicide and was instead murdered by the US government to protect their secrets.

Whilst that does actually sound kind of plausible given the fact that McAfee said he would never hang himself in prison recently, there’s obviously still quite a bit of uncertainty surrounding it. However, there’s also quite a lot of weirdness involved in his death so you can see why people might think that.

One such incident concerns his Instagram account, which posted a picture of a massive Q shortly after news of his death broke. Nobody knows what this refers to but the obvious link is to the QAnon conspiracy theory that claims Donald Trump is a freedom warrior going up against a sinister cabal of Satan worshipping cannibal paedophiles and other such nonsense.

THIS JUST IN— John McAfee’s both Instagram and Twitter profiles deleted. Stay tuned and enjoy the show. #mcafeedidntkillhimself pic.twitter.com/6EoN4yDETh

So what’s all that about then? I gotta say I really have no idea – I guess someone on his team has access to his account and decided the world would be a better place if it was deleted? Doesn’t really explain the Q though? Maybe his account was hacked by a QAnon supporter who also murdered him? But if that’s true why not get rid of his Twitter account as well?

There’s a lot of conjecture flying about even here and I’m sure it will continue to do so for years. Likely never find out in all honesty. Sure everyone will be talking about it though.

For more of the same, check out these old tweets about how McAfee said he would never commit suicide. Yeowch.