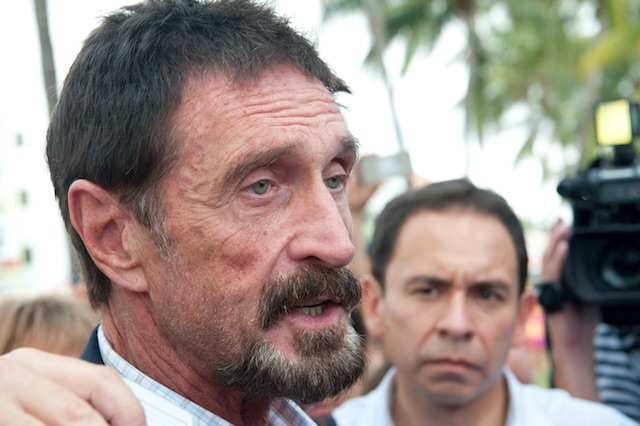 It was reported late last night that antivirus pioneer and straight up wildman John McAfee was found dead from an apparent suicide in a Spanish prison cell, but Twitter users now think that there might be something a little bit more suspicious going on here.

McAfee was arrested in Barcelona back in October and it was ruled yesterday that he would be extradited to the United States to face several charges of federal tax evasion, as well one involving a cryptocurrency pump and dump scheme. Hours after the ruling, he was found hung in his cell with the newspapers saying that all signs pointed to suicide and there would be no active investigation into his death.

However, Twitter users remembered the following tweets – one from back in October shortly after he was arrested and another from November 2019 where he claims that the US government were going to kill him and make it look like a suicide:

The food is good. All is well.

Know that if I hang myself, a la Epstein, it will be no fault of mine.

Getting subtle messages from U.S. officials saying, in effect: “We’re coming for you McAfee! We’re going to kill yourself”. I got a tattoo today just in case. If I suicide myself, I didn’t. I was whackd. Check my right arm.$WHACKD available only on https://t.co/HdSEYi9krq🙂 pic.twitter.com/rJ0Vi2Hpjj

That seems awfully prophetic doesn’t it? I suppose you could argue that McAfee was terrified of going to a US prison as they are absolutely going to be way worse than any Spanish prison and he might end up getting raped all the time, but you still would think that he might stick it out and try and defend himself and see where it went? He could probably afford a good lawyer you know, so he definitely might have a chance of beating those charges? Could always just kill himself afterwards as well?

Very suspicious, although I’m also not really sure what McAfee could have been up to that would make the powers that be sneak into his jail cell and whack him. Guy was a major nutjob though so could have been anything really. RIP.

For more of the same, check out the trailer to the absolutely crazy documentary about the guy. Probably needs to be updated now.