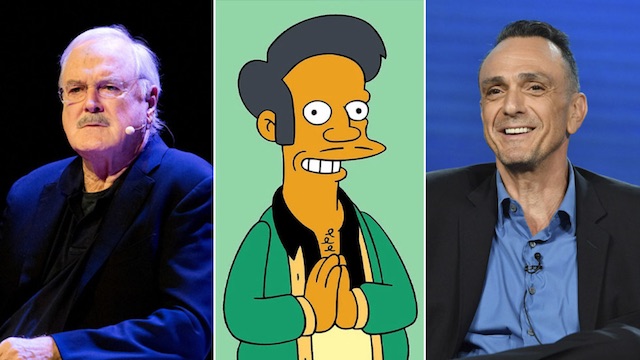 The character of Apu in ‘The Simpsons’ has been problematic for some time as he been seen to reinforced racial stereotypes about Indian Americans – there was even a documentary made about it called ‘The Problem With Apu’ – and this week the actor who voiced the character Hank Azaria decided to apologise for his part in all of it on a podcast.

Most people kinda understood why he was speaking up and expressing his thoughts on the matter, although it does obviously open up a whole different question about stereotypes being portrayed in art and causing offence to people. Does a Scottish person voice groundskeeper Willie and is that offensive to our friends north of the border for example?

Whilst that’s a massive debate I don’t really want to get into right now, one person who definitely missed the point and thought it was completely stupid was John Cleese, who decided to tweet the following:

Not wishing to be left behind by Hank Azaria, I would like to apologise on behalf on Monty Python for all the many sketches we did making fun of white English people

We’re sorry for any distress we may have caused

Ugh, it’s so annoying when old white men do stuff like this. I think the reason that people found Apu offensive was because white men were writing and voicing the character and essentially making fun of Indian Americans with him and that can be construed as racism for obvious reasons. That’s completely different to what John Cleese is doing as a white English man making fun of white English men because you’re allowed to make fun of your own people and nobody is ever going to be offended by that unless they’re an idiot.

The two situations aren’t really comparable. John Cleese should listen to the American Indians that are constantly hit with Apu slurs and understand how the character has affected them negatively in their everyday lives. Listen to the people that these problems are affecting and don’t just say they don’t exist because you don’t think they do. It’s not that hard to not be completely tone deaf to a situation.

For more of the same, check out everything that Hank Azaria had to say about Apu here. Well worth reading.