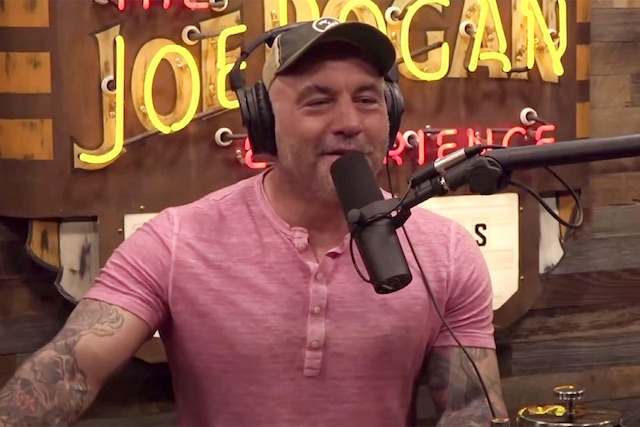 I really want to like Joe Rogan as he comes across as quite a fun, cool guy but some of his alt right opinions are just too much for me and I’m surprised that more people don’t feel this way – instead his popularity seems to be soaring. Guess I’m probably too woke for him and should probably just switch off because he doesn’t like what I’m thinking.

Anyway, Rogan’s latest controversial opinion involved him talking about the COVID-19 vaccine on his podcast and whilst he did point out that he thought it was pretty safe in general, he also advised young people not to take it as well. Here’s what he said:

I think you should get vaccinated if you’re vulnerable.

But if you’re like 21 years old, and you say to me, should I get vaccinated? I go no.

Are you healthy? Are you a healthy person?

Like, look, don’t do anything stupid, but you should take care of yourself. You should—if you’re a healthy person, and you’re exercising all the time, and you’re young, and you’re eating well, like, I don’t think you need to worry about this.

Spotify’s Joe Rogan encourages “healthy” young people not to get a coronavirus vaccine. His show is Spotify’s most popular podcast.

Yeah I don’t really know why Joe thinks that as I’m fairly sure that there have definitely been a bunch of cases of young people who were perfectly healthy catching COVID and dying from it – just take a look at Brazil and India right now dude, I think something like 1000 babies have died recently in Brazil – so it seems like an uniformed opinion to go out and share with the rest of the world, especially given the amount of listeners who will be tuning in to his podcast. Be interesting to see if Spotify does anything to censor this episode as they’ve already deleted a few of his more problematic older ones from their back catalogue despite saying they wouldn’t do anything of the sort and this is clearly the kind of thing that’s going to get some people’s goat. Probably quite rightly so too.

Obviously, the feedback regarding Rogan’s comments on vaccine has been absolutely off the chart with people on both sides feeling the need to chime in with some super stupid comments. Here are a few of my favourites that I’ve managed to pick up over on Twitter:

Joe Rogan is encouraging young people not to get the vaccine.

Joe Rogan is not the smart person that your sexually frustrated teenage son thinks he is https://t.co/7UqI8x06Cj

I once heard Joe Rogan described as a “stupid person’s idea of a smart person,” and it can’t be said any better than that. https://t.co/R4HtV4pJ1E

My feeling is that, no matter what your age, you should not take medical advice from Joe Rogan

yo, fuck joe rogan. it’s so deeply irresponsible to tell young folks not to get vaccinated on the BIGGEST podcast in the world. everyone should get vaccinated as soon as they can, for themselves and for everyone else.

both shots. don’t be an idiot.

Joe Rogan is correct about the COVID vaccine for kids & young healthy people.pic.twitter.com/AxGwFxAMVB

What did Joe Rogan say that was wrong?

They want you in a state of fear so they can increase their control! pic.twitter.com/ycISyOmPwl

This excerpt from Joe Rogan has TRIGGERED the Left Sheep. Too bad for them, they can’t cancel his podcast🤣which is the largest in North America. Great Job Joe👏 pic.twitter.com/TrKNYTH9xN

I guess you can’t argue that Joe Rogan isn’t earning his pay cheque as he’s always getting people talking and everyone has an opinion on him. That’s why Spotify hired him and that’s why more people are listening to him than ever. Guess you gotta rate him for that.

For more of the same, check out Joe Rogan interviewing a scientist at Area 51 who confirmed that aliens were real. That was a cool episode.