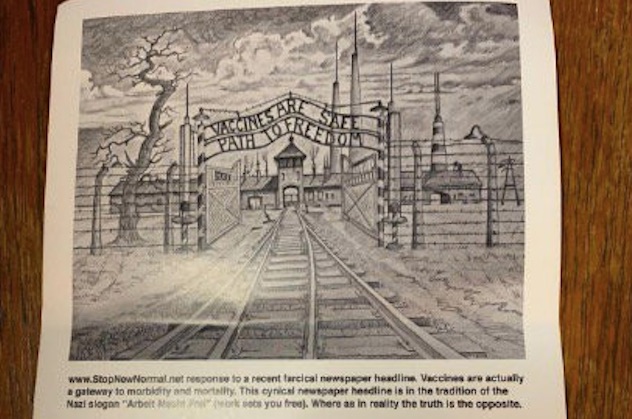 What the hell is wrong with people?

The second day of February and I fear that we won’t get anything weirder or more outrageous than this after the news that Jeremy Corbyn’s brother Piers has designed and distributed a flyer that compares the vaccine campaign to Auschwitz. Where the hell do people come up with this stuff?

Piers is an arch conspiracy theorist and teamed up with artist Alexander Heaton to design the leaflet that was distributed around Southwark, London over the weekend. The flyers also stated that some vaccines contained nanochips that could track some recipients, which is obviously false and really stupid because why would anyone wanna track a bunch of old people who probably just sit around their retirement homes all day? Ridiculous.

Anyway, Corbyn was asked by the Evening Standard if he was responsible for the leaflets and said the following:

This rubbish was put through people’s doors in a part of London yesterday. Vile at any time, incredibly appalling coming the week of Holocaust Memorial Day. Shameful. pic.twitter.com/foXs5qlEw7

A group of us came up with the idea. The Evening Standard was saying that vaccines will set us all free and it is not true.

Of course we’re not breaking the law.

It’s one thing not believing in vaccines and talking about that – I might think it’s stupid but you’re entitled to your opinion – but it’s another one entirely to compare it to the Holocaust. That really isn’t on and is typical of the antisemitism that blighted Labour during Jeremy Corbyn’s reign as leader.

I get that they’re trying to provoke a strong reaction with imagery such as that, but can’t they read the room and realise that some things are just completely off limits when trying to do something like this? So messed up that people think that this is acceptable.