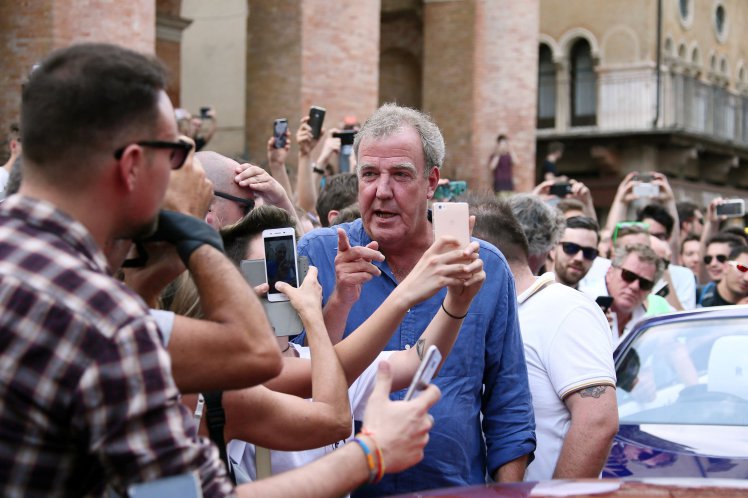 Chris Evans ‘stepped down’ from ‘Top Gear’ earlier this week (re: was told he had to quit or be fired because everyone absolutely hated him, both in the studio and watching at home) and all week we’ve been waiting to see how the former ‘Top Gear’ presenters would react to this news.

Well, the day has come and predictably Messrs Hammond, Clarkson and May couldn’t be more smug about it or how they chose to deliver the news. First, Clarkson tweeted the following, encouraging crowds of Italian fans to come and hang out with the team as they shot footage for their new show ‘The Grand Tour’:

People of Italy. James, Richard and I will be filming in the piazza Dei Signori in Vicenza tomorrow at 3pm. Come along

People of Vicenza. Richard Hammond is 20 minutes away. Give him a warm welcome

Naturally, a whole bunch of journalists and cameramen were on hand to greet the guys, as well as a massive crowd of fans. Upon their arrival, the team were asked the inevitable questions about Chris Evans’ resignation and it sounds like they couldn’t be happier about it.

Yeah so they didn’t really say much, but it says it all really when you’re rocking up to a huge ass crowd for a show that hasn’t even aired yet and the guy who has replaced you on your old show has been forced to resign after one series because it was crap and everyone thinks he’s a dickhead. Well played lads.

To be fair, this clip of Jeremy Clarkson trying to assemble a box was way better than the new ‘Top Gear’, so it’s not really that surprising.