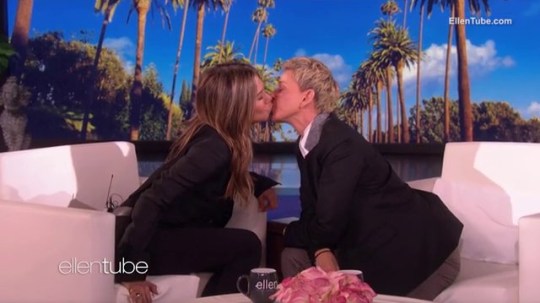 You kind of think that most girls have kissed another girl at some point in their life now because it seems like most of them have, but apparently there are some out there that have still never had the pleasure and Jennifer Aniston was one of these until her recent appearance on the Ellen show.

Aniston was attending the show to promote her new TV show ‘The Morning Show’ which is debuting on Apple+ when it launches and somehow got into the subject of how she had never kissed a girl before throughout her life. Ellen being Ellen and obviously a massive lesbian therefore decided to give her the opportunity to break her duck right there and then on live television:

Lol that was a stupid segment wasn’t it  (loving the guy’s reaction at the end if you made it that far) and probably wasn’t really what a load of you thirty guys clicking on this article were hoping to see, but maybe it’ll help some of you next time when you’re jerking off over Jen. Maybe. In the meantime, check out The Morning Show I guess.

For more Jennifer Aniston, check out Warwick Davis bitching about her not acknowledging the fact that she was in Leprechaun. Really weird situation that one.