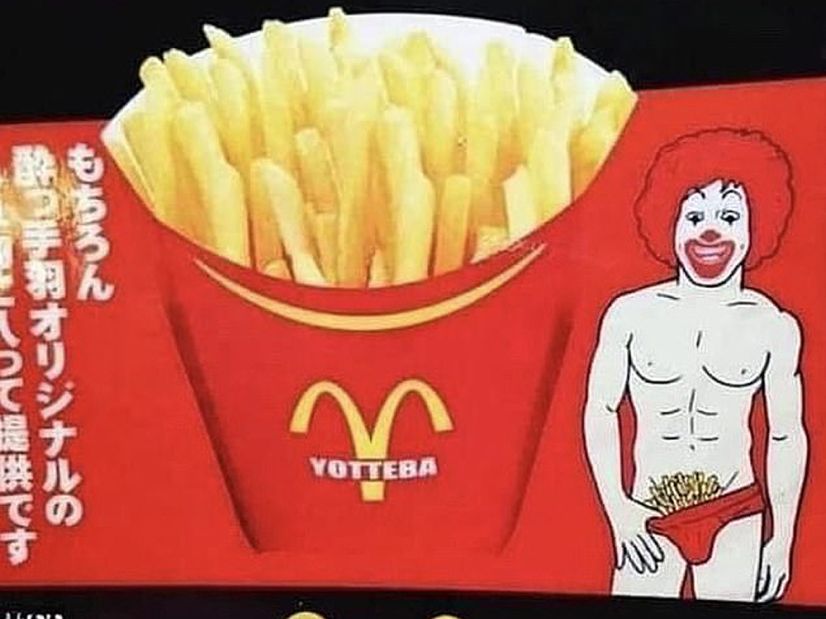 That’s not sexy at all.

It seems inevitable that as time passes and iconic characters become older that they’ll have to be rebranded to appeal to younger generations, but man do some companies have completely the wrong idea about how to do this.

Case in point: this pub chain over in Japan called Yotteba, who seem to have wanted to rebrand Ronald McDonald as some kind of sexy lothario judging by their latest artwork that depicts him as a cheeky ripped dude wearing only a pair of red pants full of fries. I guess it’s kinda cool, but it definitely doesn’t want to make me want to eat the fries anymore as instead of that salted flimsy goodness, I’m probably going to the thinking that I’m actually eating Ronald McDonald’s pubes from now on.

The thing is Yoteba doesn’t actually have anything to do with McDonald’s and the sexy Ronald McDonald was actually dreamt up by a New York artist called Wizard Skull about three years ago. Although the logo on the red fries holder – and indeed the holder itself – is designed to make it look like it’s a McDonald’s fries holder it isn’t at all and is actually a parody.

Maybe they’re saying don’t eat McDonald’s fries because they’re Ronald’s pubes and eat ours instead? Or maybe they’re just saying that theirs are actually Ronald’s pubes? Kinda confusing when it’s Japanese, you know? I do know that they’ve got a tonne of publicity from the stunt though.

For more of the same, check out someone decapitating Ronald and then trying to burn him alive. Ouch.