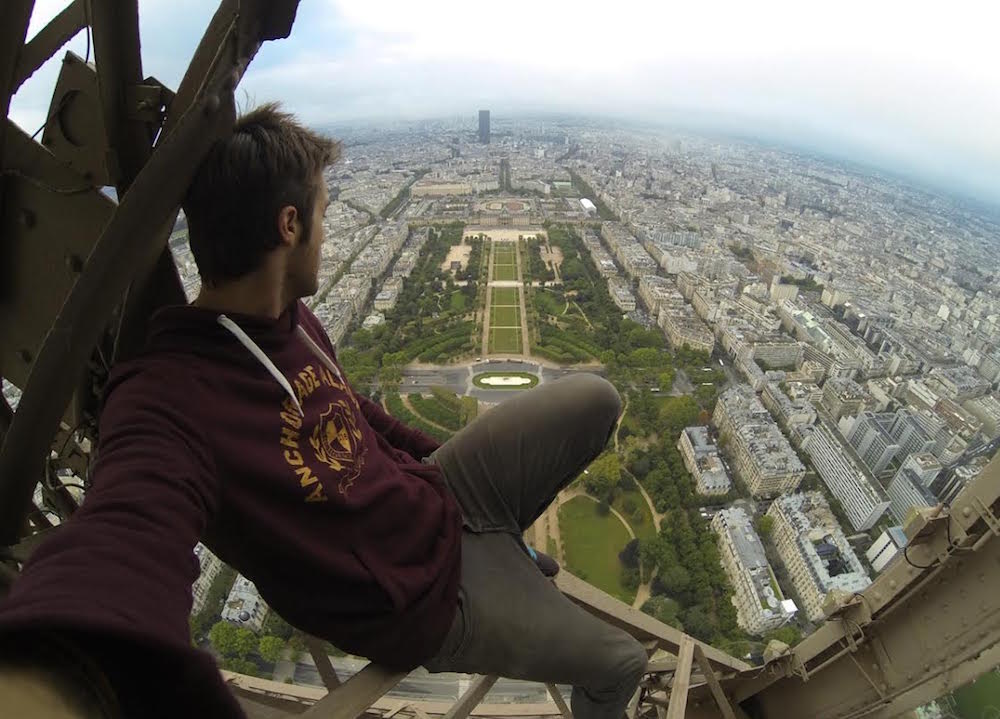 James Kingston’s most ballsy feat yet?

We’ve featured the antics of James Kingston (hanging off ridiculously high cranes, climbing up Wembley stadium etc) a bunch of times on the site before, but every time we feature one of his new videos he seems to have surpassed himself.

This time, he’s only gone and headed over to Paris in order to climb up the Eiffel Tower, which he says has been on his bucket list for a while. I’ll let him explain the climb in his own words:

The Eiffel Tower has been one of my goals for quite a while. Plan A for the Tower was to buy tickets to the second platform and climb out of one of the stairways. This immediately failed as it was just too busy. We didn’t really have a plan B so we decided to commit to climbing right up the side from the ground and see what happens.

We started the climb at 1AM narrowly avoiding the patrolling security (which seemed more like the French army as they were in full camo & had massive guns) & wormed our way through what seemed like endless CCTV cameras. Once we reached about 20 meters up the side of the tower it appeared we’d made it through what would normally be the riskiest part of any climb.

As far as I could tell, the tower was ours for the night. After slowly making our way up through the framework of the Tower, we finally reached the top platform which was fully lit up. This is where we should have probably stopped but my curiosity got the better of me. I unlocked the door, slowly crept in and was immediately hit with the sound of a walkie talkie going absolutely mental in French.

It was clear we’d been spotted so we legged it down a few stories & found a couple of holes inside the framework that we had no choice but to hide in. Hours went by with security going up & down with torches & they even turned on all of the towers lights during their search. The lights finally went off and the tower was ours again so we began the wait for sunrise. After a few more hours playing around on the tower workers & tourists started coming up in the lifts.

We were spotted again around 9AM so we climbed down & met with security. We were handcuffed & taken to the local police station where we were held & questioned for around 6 hours before being released without charges (I also had to promise them I wouldn’t climb it again for 3 years). I can now officially tick the Eiffel Tower off my list 🙂

Sounds like a lot of fun I guess? Whatever you need to get your kicks I suppose.

If you want to see more of James Kingston climbing up ridiculous structures all across the world, then click here.