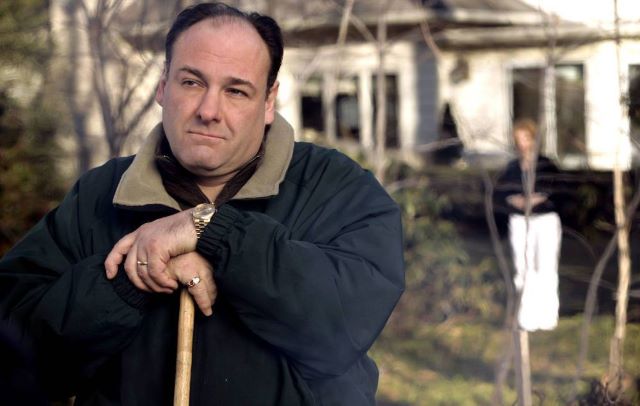 Actor Robert Patrick, who played Davey Scatino in season 2 of ‘The Sopranos’, sat down with Michael Imperioli and Steve Schirripa on their podcast ‘Talking Sopranos’ this week and shared a great anecdote about his first day on set involving James Gandolfini himself.

Patrick describes pushing Gandolfini’s buttons on purpose before filming a scene with him, which was advice given to him by his acting coach.

I had never met Mr. Gandolfini. I am out front on a bench smoking a cigarette with Jimmy after we’d just done this read through. And we’re trying to get to know each other a little bit because we’re supposed to be high school buddies. As the conversation was winding up, I said to him, ‘You know the scene where you come to get your money, you better bring your fucking A-game.’ And he looked at me said, ‘Oh, I’ll bring my fucking A-game.’

Before he walked off, Gandolfini flicked his cigarette at Patrick.

The next time the actors would see one another would be the moment when Tony comes to collect the $45,000 that degenerate gambler Davey borrowed and subsequently lost in the high-stakes “executive” poker game.

[Gandolfini] came in and said, ‘How’s your balls?’ I said, ‘They’re fine.’ And he said, ‘I’m hungover, let’s do this fucking scene.’ And man, it was one take. And he scared the living shit out of me. I was so intimidated. What a fantastic experience.

The best anti-gambling ad ever really. Of course we all knew already that James Gandolfini was an amazing actor and that there literally isn’t another person on the planet better suited to the role of Tony Soprano than he was, but it’s still cool to hear stories like this about how he could just show up to set hungover and nail a pivotal scene in one take.

Big up Robert Patrick as well who is a great actor in his own right, and did such a good job playing David Scatino that it was easy to believe he was this massive dork/loser who could legitimately make Tony Soprano that violently angry. Knowing that he was hungover at the time just makes the scene 100x better. There are people who can’t even go to the shops to get some milk while hungover and here’s James Gandolfini putting out classic scenes in one take. What a legend.

For the time Lady Gaga fans freaked out upon realising she appeared in The Sopranos when she was 15, click HERE.