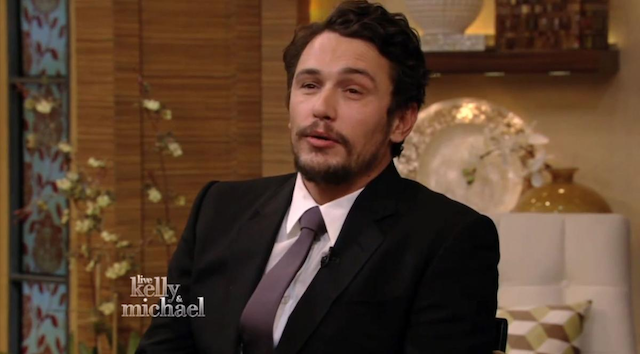 James Franco appeared on LIve With Kelly And Michael this morning to try and clear up recent allegations that he’s a creep.

James Franco appeared on Live With Kelly And Michael (who the hell?) this morning to try and clear up rumours that spread around yesterday that he was trying to have sex with a 17 year old Scottish girl.

Instead of denying or excusing his actions though, Franco completely admitted that he had done all this and then some. Here’s what he had to say:

‘I’m guess I’m, you know, embarrassed, and I guess I’m just a model of how social media is tricky. I used bad judgement.’

‘In my position, not only do I have to go through the embarrassing rituals of meeting someone, but sometimes it gets published for the world.’

So that cleared that up. Of course, everyone has already figured out by now that this is an incredibly weird and complicated (and perhaps quite plainly just a completely bad idea) PR stunt for his new movie Palo Alto, in which he plays a soccer coach who has an affair with one of his teenage players. It’s getting people talking about him sure but is anyone talking about the movie aside from us? Still, you have to admit it’s a great use of social media and very creative and not exactly illegal, even if it is really creepy.

It’s worth noting that Franco wasn’t asked about this but brought it up himself, which again adds to the theory that it’s just a really ill thought out promotion for his movie. Although having said that I hadn’t heard of it at all before this and I might go and see it now. You can check out his appearance on Live With Kelly And Michael (nope, still no idea) below and the trailer to Palo Alto below that too because we’re nice like that.