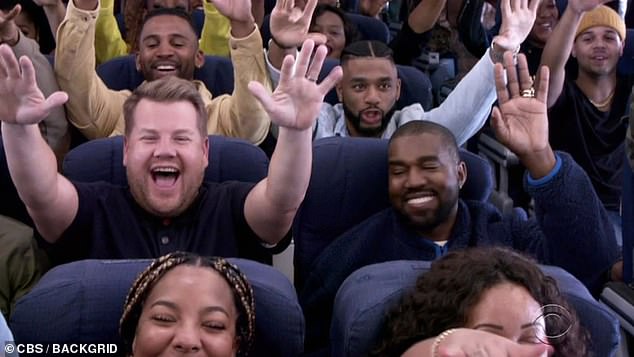 They filmed Carpool Karaoke 30,000 feet in the air.

Over the last few months there’s been a big surge in protests all over the world demanding rapid response to climate change, with many of the protests alienating and annoying people rather than winning them over to the cause.

Well two people who definitely haven’t got the message are Kanye West & James Corden, who promoted the release of Kanye’s new album with a special ‘Airplane Karaoke’ 30,000 feet in the air:

Some people were not happy about the impact this flight would have on the planet and they let Twitter know it:

Okay… so society demonises disabled people every time they use a plastic straw because they are “killing the planet,” but a couple of rich men using a whole PRIVATE AEROPLANE for a bit of karaoke for the sake of a TV skit is just absolutely fine? Is THAT where we are now? https://t.co/NBxIFTAhIR

The planet is dying https://t.co/MYKfJhrbXW

This man is fuckin up the planet bro fuck him https://t.co/XuHcsSpZ8K

even if we ignore that k*nye is the guest for this it’s 2 rich men flying on a private yet for fucking what? 20 minutes of internet content? more money on their paychecks?

millionaires do shit like this and call it “exciting” while poor ppl across the world fight for our planet https://t.co/XX2kqbRfzZ

the planet is dying sir https://t.co/VOufxzicjv

I guess it would be pretty interesting to get James Corden’s thoughts on this since he’s been banging on about climate change for years, but there are probably more irresponsible uses of private planes than using one to take James Corden and his TV crew and Kanye West and a zillion choir members across America. Wait till they hear that Kanye recently flew a private jet to gift DJ Khaled some Yeezy trainers.

For the Zelda sample that people claim Kanye West stole for his new album ‘Jesus is King’, click HERE.