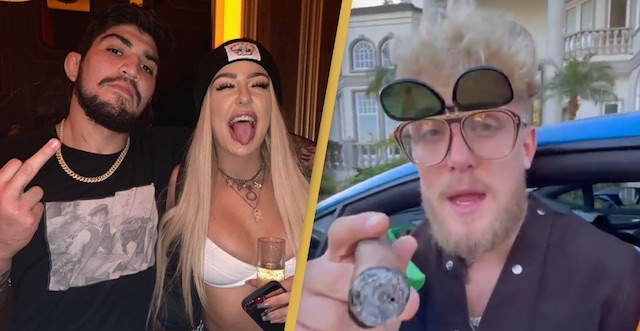 I told you it wouldn’t be too long until we were writing about Jake Paul’s antics yet again in trying to secure a big money fight with Conor McGregor and here he is yet again, FaceTiming Dillon Danis’ girlfriend in order to get a rise out of him.

Savannah Montano was probably minding her own business when she received a FaceTime request off a number she didn’t recognise and as is usually the case with these things you’re probably going to answer. Imagine how annoyed she must have been to find out it was Jake Paul – well actually you don’t have to imagine because Paul recorded the whole incident and posted it to his Instagram story.

He clearly turned the sound down though because she was pissed at him to create the idea that there was something going on between the two of them. I don’t think anybody is going to be buying that though looking at this video:

Lol. In case there was any doubt over the matter, Montano also posted the following to her own Instagram story:

Yeah, it is pretty clear to everyone except Jake Paul’s 12 year old fans, it’s true. She kinda makes a good point about how she isn’t interested in any of this and is being used as a pawn in Jake Paul’s weird game as well, but I guess if you’re going to date a celebrity like Dillon Danis then this is what you sign up for. Get with the program lady!

For more of the same, check out Jake Paul throwing water balloons at Dillon Danis yesterday. That was kinda funny to be fair.