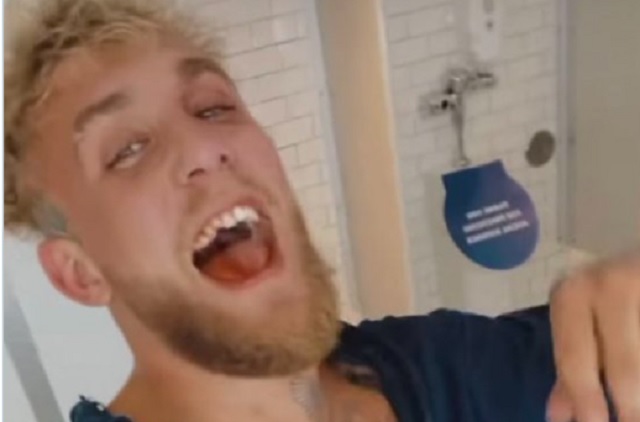 Watch Jake Paul snatch Floyd Mayweather’s hat from his head and get beaten up for his troubles.

Say what you want about Jake Paul – the kid has serious balls and knows how to make the headlines. Case in point; bullying Floyd Mayweather in front of the press the other night and snatching his cap from his head.

Floyd Mayweather, Logan Paul and Jake Paul just got into it 🍿pic.twitter.com/YVCgukjwVO

Looks like Jake Paul’s shenanigans resulted in him finally discovering what it’s like to fight a real boxer, as the 24-year-old YouTuber was left with a black eye and broken tooth, which he actually seems pretty excited about:

Jake Paul broke his tooth and caught one on the left eye after snatching Floyd Mayweather’s hat. He doesn’t care 😏 pic.twitter.com/UOJyGizd7Q

Jake claims it was one of Floyd’s bodyguards who gave him the black eye and not Floyd himself:

As insufferable as the Paul brothers are, you can’t deny this whole stunt was actually kind hilarious. I mean imagine being Floyd Mayweather, one of the greatest and most respected boxers in history, and having some little punk like Jake Paul do that to you? The way he steals his cap and then runs off saying “gotcha hat” is just incredible, grade A trolling. The best part is he kept saying “gotcha hat” as Floyd chased him down, then changed his Twitter username to ‘Gotcha hat’, and is now making a killing off Gotcha Hat merch:

if you don’t get gotcha hat then a fool👇🏼https://t.co/Z6fKZE1mLK

Love him or hate him, the kid is something of a mastermind. Yeah OK this could all have been staged but I don’t know that Floyd Mayweather would allow himself to look so foolish at the hands of a YouTuber for a few extra million in the bank. Then again… maybe he would. There’s no faking that black eye and chipped tooth though.

Floyd takes on Jake Paul’s brother Logan in an exhibition match on June 6th – expect more antics between the two parties before then.