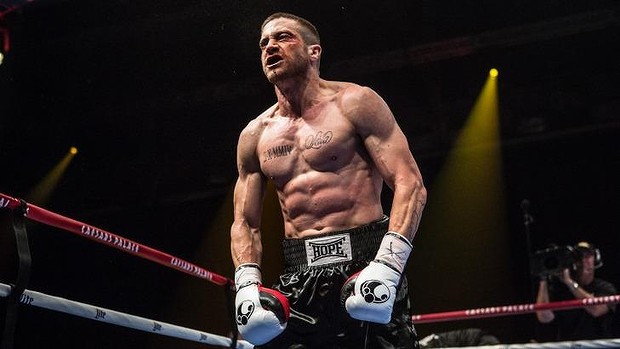 Jake Gyllenhaal lost 30 LBS to play in Nightcrawler last year, and this year after returning to normal weight he added 15 LBS of pure muscle to get ripped for upcoming movie Southpaw about a widowed boxer looking for another shot in the ring.

I wanted Jake to learn how to box so he wouldn’t be out there on the set trying to act like a boxer. I pushed Jake to the limit.

He had Gyllenhaal training for six months before filming even began, and he was burning so many calories every day that his diet plan wasn’t even that strict. They started off with 3 hours of workouts a day: An hour and a half in the morning and the same in the evening. After 2 months, they pushed the workouts to six hours a day: three hours of boxing in the morning and three hours strengthening, conditioning and cardio at night.

I know most actors play it off like we have no idea how stressful their job is, but man I would love to get paid millions to get into the best shape of my life. That’s basically what Jake Gyllenhaal just did. He got paid to work out every day so that he could look awesome for his movie which would then get him paid more. Meanwhile the rest of us try to find an hour in our day to squeeze in some exercise. Jammy guy.