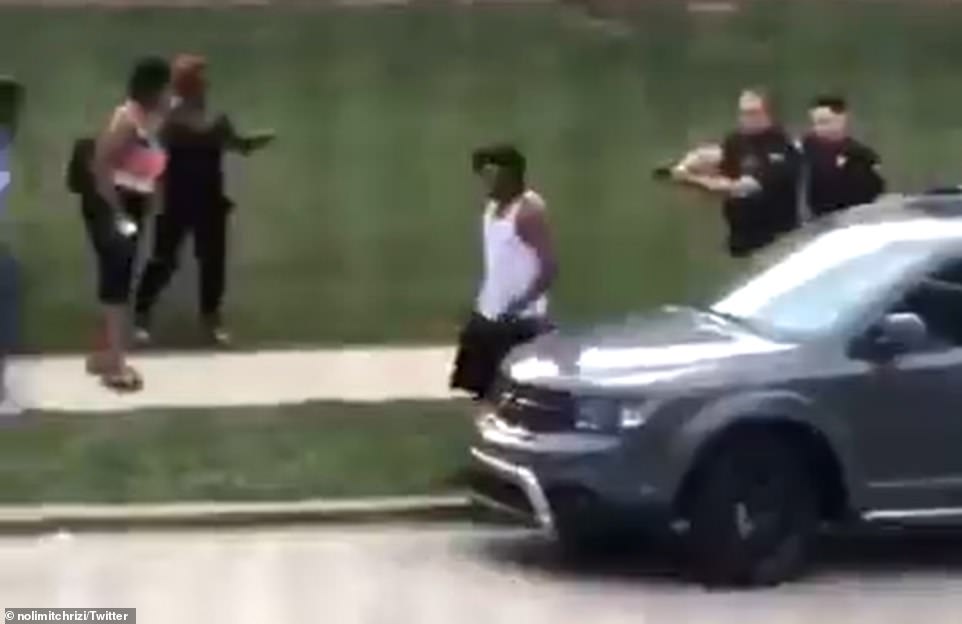 I never thought we’d have another George Floyd situation on our hands just a couple months after the incident that rocked the world, but here we are.

Smartphone footage from out of Kenosha, Wisconsin, shows police responding to a domestic incident involving a 29-year-old man named Jacob Blake. According to the Washington Post, Blake was trying to break up a fight and police, at first, tried to taser him.

Blake approaches a gray SUV and as he opens the driver’s side door, gets shot in the back multiple times (with his three kids in the car watching):

The good news is that Jacob Blake is alive and recovering in hospital. Regardless, anger immediately erupted online and livestreamed videos posted to Facebook and Twitter showed crowds swarming the streets in protest. The incident took place at 5pm yesterday and at 7am this morning, Kenosha police declared a state of emergency curfew.

Crowd is lessening but there’s still at least a couple of hundred people in the square next to the Kenosha County Courthouse. @journalsentinel pic.twitter.com/L86IBr7oOh

Opinion is split online as to whether the shooting was justified:

For everybody that doesn’t think we need police accountability and reform watch. Yes that is someone’s life that just flashed before yours. These are lives police are not above the law

People better start realizing cops are on edge man… these guys have families at home as well. Just listen to cops even if you feel they are in the wrong and maybe this man would be alive today.

Seeing so many people defend the cops in these comments is disgusting. There is no possible way this was the best way of handling the situation. Tackle him, tase him, anything besides shoot to kill

Ok. Cops just shot this man in cold blooded murder. The guy was trying to get away from them and get in his car.

Wonder if the resisting arrest and reaching into the car had anything to do with it? No?

Three police officers can’t prevent a man (calmly) walking to his car without murdering him? #DefundThePolice

There should have been tasers deployed. That said, once he’s opened the vehicle door and is reaching, they’ve ALL told him to stop.

When is this going to stop dammit. What is so hard about complying. Actions DURING the police interaction change how it goes almost every time.

It’s a tricky one. Does a human being deserve to die/get shot multiple times for not complying with a police officer’s demands? Well if that also involves reaching into a car and potentially grabbing a weapon – maybe. But was there a weapon in the car and was Jacob Blake a guilty party in the ‘domestic incident’ in the first place? These are questions that haven’t been answered yet but perhaps aren’t even relevant. Either way, not a great look for the police at a time where America is still burning over the death of George Floyd. No doubt we’ll be seeing a lot more fallout over this in the weeks to come.

To watch police body slam a man and break his arm for no reason (after mistaking him for a panhandler), click HERE. Sort it out, America.