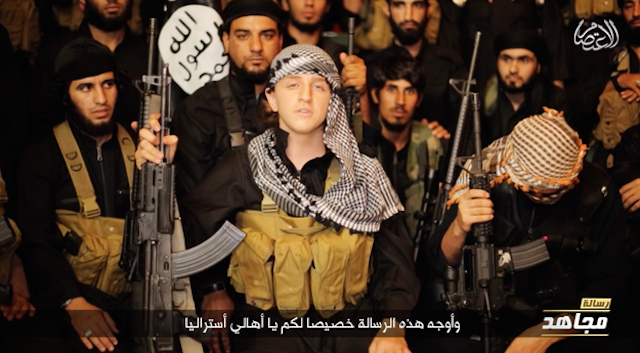 They keep on getting younger.

Surprisingly it’s been a few days since we’ve featured anything about ISIS on the site but here they are back again. It’s been well documented that there’s a big ISIS presence in Australia, but it probably isn’t that well known just how far their influence spreads and this latest video is particularly shocking.

It’s part four of a heavily produced propaganda series called Message Of The Mujahid and it features a 17 year old who went missing from West Sydney four months ago reciting a speech whilst being surrounded and flanked by other young men carrying guns and looking pretty violent. The kid is referred to in the video as Abu Khaled, but he’s been identified as Abdullah Elmir from Australia. He went missing along with another kid but the other one was intercepted by his father, whereas it seems Elmir has risen quickly through the ranks of ISIS.

Here’s what he has to say in the video:

Frightening stuff and even more terrifying that some 17 year old kid from Sydney is over in Syria making these videos, especially after the ridiculous training video they released last week. You can see some clips from the video below but it has since been removed from YouTube.