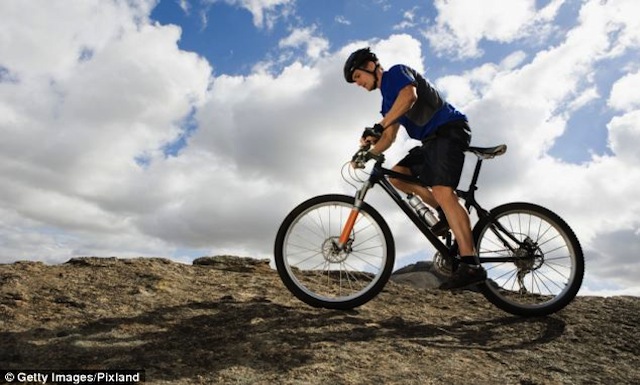 An Irish mountain biker was bizarrely stuck with a 7-week erection that refused to go away after injuring himself on the crossbar of his bike.

An Irish mountain biker was bizarrely stuck with a 7-week erection that refused to go away after smashing his groin into the handlebars of his bike.

He soldiered on with the erection for 5 weeks before finally deciding he should get it checked out. Doctors at Dublin’s Tallaght Hospital diagnosed him as having priapism — abnormally high blood flow to the penis, which somehow triggered after his crash. To fix the problem they had to insert gel foam and four tiny platinum coils into his penis to correct an abnormal connection between an artery and a vein. Ouch.

Docs say you should always get a lengthy, rigid erection checked out as it could lead to blood clotting if left untreated. The man is now said to be enjoying “satisfactory erections and intercourse.”

Have to say though, if this guy’s anything like the Irish dudes we know it’s very impressive he managed to sustain a 7-week boner through 2 months of getting completely shit-faced – priapism or no priapism. Then again he’s a mountain biker, so he’s probably nothing like them at all.

Be safe peeps – never wait 5 weeks to get anything checked out at the hospital. The 4 hour rule exists for a reason.