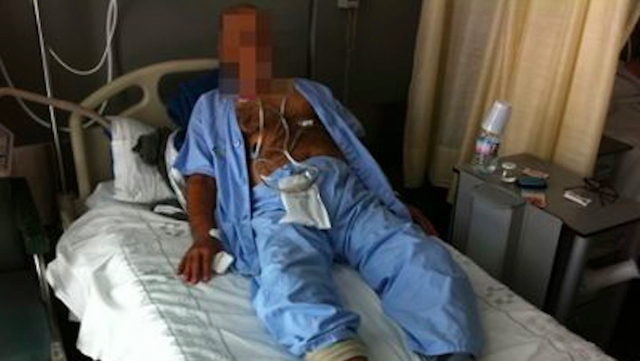 A 66-year-old gentleman popped one pill too many and ended up with a permanent boner that eventually had to be amputated.

Viagra isn’t just the quick fix it appears to be as one 66 year old man from Colombia found out last week when he popped one pill too many and ended up with a permanent boner that eventually had to be amputated. The unnamed dude took way too much viagra in an attempt to please his new girlfriend and eventually had to go to the hospital when it finally became too much for him to walk around with a huge erection all the time.

After studying his dick, the doctors noticed that it was inflamed, fractured and also showing signs of gangrene. The guy had to get transferred to a better hospital in a place called Neiva because they were ‘alarmed by the complexity of the issue.’ It was then decided by these experts that the only course of action for them was to amputate his penis to stop the gangrene from spreading to other parts of his body. That’s probably the most unlucky story I’ve ever heard – imagine how gutted you would be if you popped some pills to try and show your girl a good time but ended up getting gangrene on your dick and having it cut off. There aren’t really any words for that are there?

Apparently incidents such as these are becoming more common all over the world. For example last week a guy from Yemen died from a viagra overdose after popping five pills on his wedding night in an attempt to make it one to remember. It ended up being one to remember but not for the reasons he was hoping.

In an attempt to try and prevent these incidents, the Colombian government has issued a warning to try and raise awareness. No telling if that will actually do any good, but after hearing this story I’m not exactly encouraged to take viagra so it might be doing some good. If you need to take viagra to show your girl a good time then just make sure you’re careful. Alternatively, just make sure you show her  a real good time because it might be the last time you ever get to even use your dick.