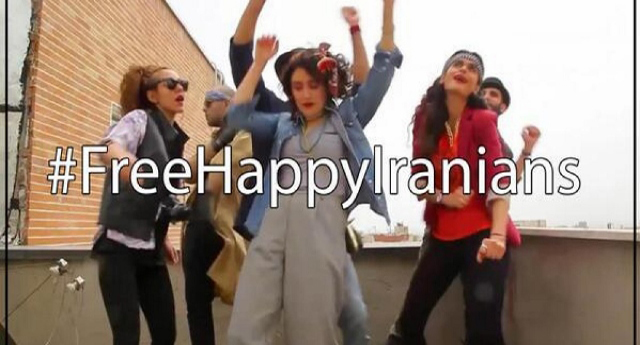 Six young people have been arrested in Iran for filming this homemade video to the tune of Pharrell’s ‘Happy’.

6 Iranian youths (three young men and three unveiled women) have been detained for making their own homemade version of Pharrell’s ‘Happy’ video. Not because it was cataclysmically cheesy, but because the Islamic Republic thought it was “a vulgar clip that hurt public chastity”.

The Iranian police deceived the 6 youngsters into handing themselves in by telling them a friend had been in a serious accident and their help was needed, but when they arrived at the location given by police they had their mobile phones confiscated and were taken into custody. What a bunch of cunts.

Apart from being disgustingly deceived and no doubt terrified, the youths were then forced to publicly apologise for the video on national television. The poor youths claimed that they were wannabe actors and just practicing their craft and never intended for the video to be uploaded.

Tehran Police Chief Hossein Sajedinia released a statement backing the notion that the video was an “obscene video clip that offended the public morals and was released in cyberspace”.

This is probably one of the saddest examples of the sheer lack of freedom of expression experienced in Iran today. These kids were simply trying to express themselves in the least offensive way possible and as a result were publicly humiliated for literally being young and wanting to be involved in today’s pop culture .
Even Pharrell himself has commented on the arresting tweeting that:

It’s beyond sad these kids were arrested for trying to spread happiness http://t.co/XV1VAAJeYI

No word yet on whether the youths face full prosecution or will be allowed to go free. Music is supposed to set people free, not enchain them.

â˜› Up Next: Inside An Iranian Mental Hospital