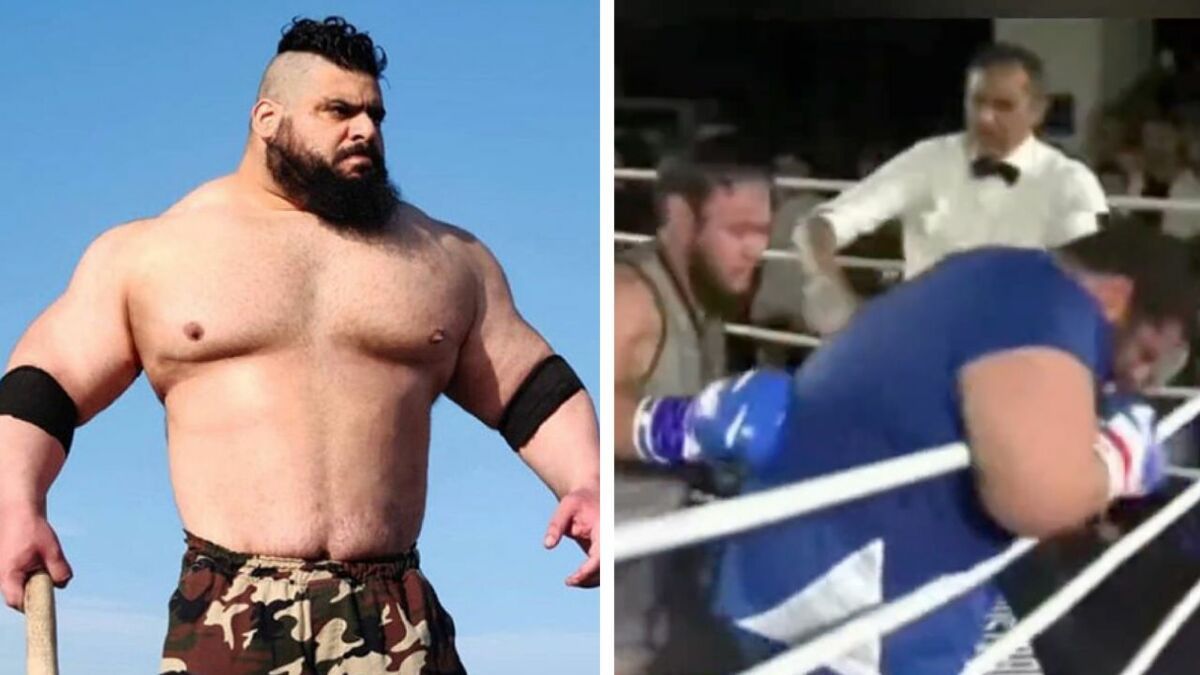 I think that most people predicted that the Iranian Hulk’s much hyped boxing match against strongman Martyn Ford would be an absolute shit show as both men had no real boxing experience and were so massive that they would be knocked out or totally gassed after about two minutes and guess what? Everyone was exactly right.

Of course, the Iranian Hulk’s boxing match against Ford was cancelled after Hulk revealed he became suicidal when Ford pushed him over at the weigh in and said he didn’t want to be responsible for Hulk being bullied or taking his own life, so Hulk instead made his in ring debut on Saturday night against some guy called the Kazakh Titan. The Titan managed to pick up the fight by rinsing the Hulk on Twitter and he absolutely rinsed him in the ring too, with the ref calling a TKO after about two minutes of the pair boxing. Can’t say I’m surprised.

During those two minutes, the Hulk looked completely incompetent. He flailed his arms around and barely landed a punch whilst getting absolutely pieced apart by the Titan and regularly turning his back on his opponent before the fight was eventually waved off. Really embarrassing performance.

There’s a few videos floating around the internet of it but nothing that’s really that high quality – this was the best one that I could find:

Geez I would be so annoyed if I paid for that, but I suppose if you’re paying money to see a celebrity boxing match then the joke really is on you.

The Iranian Hulk apologised to the Iranian people for his performance and said he felt deeply ashamed about it, but his coach gave a more detailed explanation for his poor showing here:

Thank you for your good and bad messages, I just wanted to give a brief explanation about the fight.

The fight was set before Sajad came to me and he signed the contract. There was no way to cancel it unless he paid a big fine for the cancellation.

We had a bad situation. Sajad came to Tehran for his training [but] we had a financial problem, the sponsor didn’t keep their word.

In short, Sajad trained with me for only two weeks and I told him he was not ready to fight. But I had to be with him because he had to fight and somebody had to coach him.

Yeah, I’m not really sure if that’s a great excuse there because the guy literally looked like he had never boxed before even once in his life. Can’t really see there being much of a career there for Hulk after this but hopefully he can recover and doesn’t feel so down about it that he does something stupid. Feel for the guy but it’s also sort of ridiculous that he even found himself in this situation given his quite clearly limited skillset. Everyone involved should take a look at themselves really.

For more of the same, check out when the Iranian Hulk was going to fight the Brazilian Hulk in an MMA match. Can you imagine how lame that would have been?