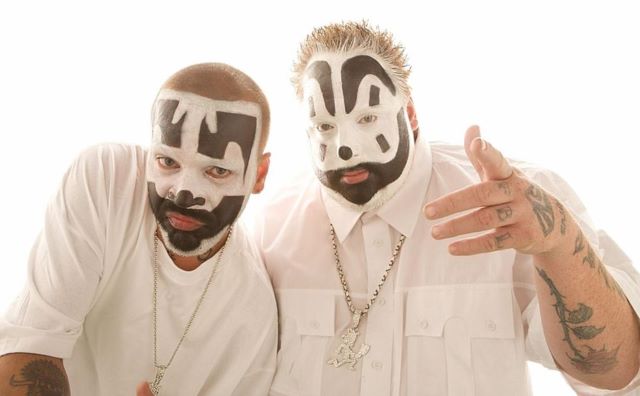 I’m not sure I’ve ever liked an ICP song or even met a fan (at least one who’d admit it), but like a lot of people I always had a weird interest/respect for the Insane Clown Posse and how they managed to build a massive following despite being seen as some kind of a joke throughout their careers.

The 49-year-old told fans during the annual Gathering of the Juggalos event the other night:

It’s very embarrassing and very not cool to have to say you’re taking a step backward.

This doesn’t mean I’m going to die or anything like that. It basically means we can’t do things the way we used to do them.

We can’t really tour no more the way we were touring.

He and bandmate Shaggy 2 Dope, 47, will be taking their act around the world one final time in 2022:

We’re gonna do one more tour next year around the world. We’re gonna do the United States, and then we’re gonna go to Europe, Canada and Australia. It’s gonna be a farewell tour.

The Detroit legend went on to detail the gravity of his heart condition.

For those of you that haven’t been to my house. The studio is probably 40 yards from my front door. I noticed walking out to the studio every day, by the time I got to the f – – king studio, I was winded.#

Doctors diagnosed him with severe atrial fibrillation — or AFib — which is a sustained cardiac arrhythmia that causes the upper chambers of the heart to beat at an extremely rapid and irregular pace.

He even underwent a procedure where specialists entered his body through his leg in order to burn off a scar that had formed on his heart due to the irregular beating.

They burned the scar off. And when I woke up, they said, ‘your [heart is] beating normal. But it could flip back at any moment from now until six years from now.’

Damn, that’s terrifying. Especially the part where he has to wait six years before being ‘in the clear’, or at least that’s how I understand it. Either way, this is huge news in the Juggalo community and the end of an era indeed. Yeah OK the ICP will still be performing shows here and there, but it’s never gonna be the same. What’s important is that these two look after themselves and stop to smell the roses a little bit. Thoughts & prayers with ICP and the Juggalos.

For the time ICP instructed their fans to beat up the paedophile singer of an emo band, click HERE. Doing the lord’s work, some might say.