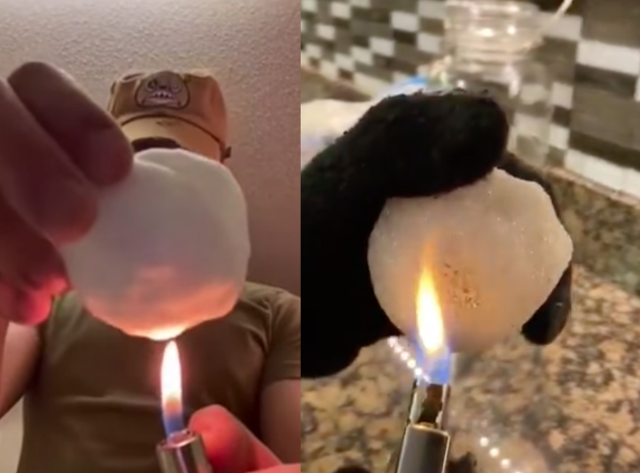 The unprecedented winter storms in Texas have resulted in at least 47 deaths thus far, including an 11-year-old boy who died of hypothermia. Power outages and blackouts have also rocked the state, which was woefully underprepared for all the snow that’s been battering them this month.

Sure enough, QAnon types have found a way to blame Joe Biden and/or Bill Gates for the chaos, claiming that the government has used some kind of weather manipulation to cover the Republican state in fake snow that doesn’t melt when exposed to flames. See what you think:

I am obsessed with idiots in Texas thinking the snow is fake and a government plot pic.twitter.com/7F0hsLB3hB

I’ll be honest – as a science believer, I initially had no clue why the snow wasn’t melting. So it’s easy to see how paranoid, conspiracy-minded people can be fooled and jump to their own conclusions. Turns out there’s a perfectly reasonable explanation for it though (via Popular Mechanics):

So what’s really happening here? The truth isn’t something sinister—it’s just science. The fire is causing the frozen mass of snow to sublimate straight into water vapor, not liquid water. Sublimation is when a solid skips the liquid phase and goes directly to gas. (The opposite happens, too, like when your breath freezes and shatters on the coldest days.)

Sublimation is what gives dry ice its patented hazy, theatrical flair. Carbon is very difficult to push into a liquid form and much more easily goes directly from frozen to vapor. Freeze-dried (“astronaut”) food is also the result of water sublimation.

Snow turns directly to vapor instead of melting because every substance has a triple point, which is just what it sounds like: the temperature at which all three states of matter for that substance can all exist.

That’s the problem with these conspiracy theorist types – instead of using Google and just a touch of critical thinking skills to look into a topic properly, they jump straight into the conspiracy theory and come up with scenarios that make little sense and end up making themselves look stupid.

I mean some of these people genuinely believe Bill Gates has a fake snow machine flying over Texas. Mind-blowing. I guess for some reason they think he and the government and China would somehow benefit from a world where people are blanketed in fake snow. Couldn’t someone like Bill Gates source endless supplies of real snow if he really wanted to? Come on now. Americans really doing their reputations no favours, as usual.

For the Ukrainian man who lied to police that he murdered someone so they could plow his snow-covered road on the way to arrest him, click HERE. Genius!