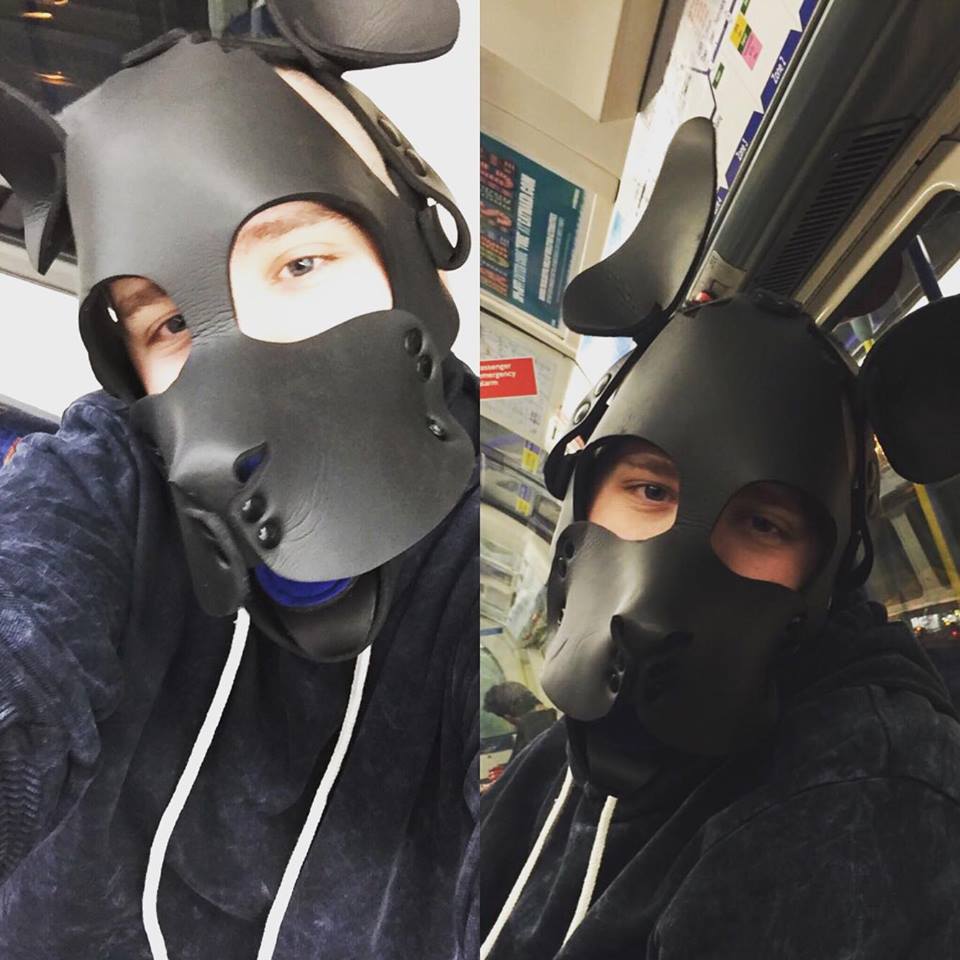 For those who somehow missed the fetish documentary The Secret Life Of Human Pups that aired on Channel 4 last week, puppy play is essentially where a person dresses up in a rubber dog suit whilst adopting a canine influenced alter ego in their spare time. Although the phenomenon originates from the kink scene, many pups including Spot the dalmatian (who was the main focus of the show) claim that it’s primarily just a unique way to relax and help them take their minds away from their busy human lives.

To find out more about what goes on behind the masks we decided to track down a real life human puppy to ask a bunch of intrusive questions about their alternative lifestyle. Luckily for you, I’m friends with a guy who spends his spare time as a puppy called Champion. I caught up with him and fired over everything we were wondering about what we’d just watched.

SC: What did you think of the Secret Life Of The Human Pups that aired on Channel 4?

Champion: I thought the documentary was okay. It portrayed the main pup (Spot) in a fairly positive light and the pup community in general positively, but obviously one 30 minute documentary can’t speak for everyone. At the end of the day the main aim of a documentary like that isn’t to show the world how amazing pup play is in order to make everyone accept us, it’s to get the highest amount of money and viewers for the company by airing a documentary about something which a lot of close-minded people will think is very weird.

The phenomenon arose from the kink scene but one of the pups in the show said that it wasn’t a sexual thing at all, is this true?

It’s definitely not true, for some pups anyway. I enjoy non-sexual and sexual pup play. I’m quite happy to pup out with friends, wrestle about, play with chew toys etc but I also love the sexual aspect of pup play. I know some pups who view it exclusively as non-sexual, and I know pups that for them it is almost entirely a sexual thing, so it would have been nice to see that reflected more in the documentary.

How did you personally get into the scene?

I actually got into the scene through the Internet, mostly through Twitter. I had been interested in various kinks: rubber, bondage, spanking, feet etc. since I was a teen and around the age of 18/19 I started to notice the increase of pups in the kink community on Twitter. This sparked an interest for me and I haven’t looked back since.

That’s a tough one! I’d say that Champion is a cute, little rubber puppy. Very submissive, sometimes a bit lazy. He has bursts of energy when pupping out but for the most part enjoys nuzzling into someone and getting lots of belly rubs and ear scritches.

Not really. Depending on who I’m with my pup side definitely shines through. Even around people who don’t know I’m a pup (family mostly), even though I don’t bark or growl at them, my pup side is still fairly present.

Where do you get the masks and costumes from or do you have to get them custom made?

Pup gear seems to be fairly readily available now, especially since companies have realised how much bigger it’s getting. I can think of at least 3 or 4 companies that make standard pup hoods in leather, neoprene or rubber, as well as companies that make ready to wear rubber gear, and a variety of other gear. The great thing is that there is the option to buy stuff that’s ready made, or if like me you are a puppy with a preference for a specific colour (for me, it’s green), you can get gear custom made to suit.

What do you personally get out of puppy play?

For me, pup play is like escapism mostly. Life can be shit and stressful a lot of the time, so getting the opportunity to pup out, sexually or not, gives me the opportunity to forget about all the other crap going on. You can just be focuses on playing with a ball, wrestling with other pups, getting nuzzles, or whatever. Also I enjoy getting the attention sometimes. If you’re at a kink event, you’re almost guaranteed cuddles and affection from other people if you’re an adorable puppy.

Do you have a handler?

I do. He’s not an owner in the sense that I’m collared by him, but he is a regular handler who I visit a lot and go to events with.

Do you keep it hidden from your friends and family or is it just common knowledge?

My parents and extended family have no idea, but my sisters all pretty much know. They’re open minded and it doesn’t really bother them. It’s the same with all my friends, I’ve always been very open about my sex and kink life around them, so don’t bother keeping it a secret and I’m happy to tell them about pup events etc. that I’ve attended. If I didn’t tell them it would be really hard to describe the big green paw tattoo on my arm!

How have people you know who aren’t into the scene reacted to the Channel 4 show?

‘m not sure to be honest, none of my friends seemed to notice it was on, the only reactions I’ve seen have been from random people commenting on newspaper articles in Facebook comment threads. Some have been totally ignorant and others open minded. I know a few people who aren’t pups or handlers, but who are into other similar kinks and the general response from them and others is that the documentary was fairly positive.

Would you ever be walked publicly in a park or down the street?

Sure. Going public walks on a regular basis isn’t really my thing, but I’d have no objection to being walked in public. Usually when I go out for the day somewhere I’ll bring my pup hood with me in case a photo opportunity arises, and I’m not really bothered if people see me in it or not.

My favourite toy is definitely my giant stuffed husky. I love chewing the ears of it! One of my pup friends has a big leather bone which I love to chew on and steal when I see him.

What was the recent puppy event you attended in London like?

The most recent event I attended wasn’t a pup specific event, but it usually attracts a large amount of pups. It’s called Collared, and it takes place at Underground, near Kings Cross. It was fun. I usually go down once or twice a month for it. Always a chance to pup out at it, and I usually end up tied or suspended and tickled, which I love. Plus lots of fellow pups attend so it’s always great to see them.

Have you or would you ever enter Mr Puppy UK?

Not really my thing. I admire the confidence of the pups who did enter, I was there for the competition at the Pup Social and it was great to see, but I don’t really like being in the spotlight all the time or public speaking.

Are there any women involved or is it mostly a male dominated space?

There are female pups involved, though it doesn’t seem that there’s nearly as many. The events I go to all are male or male identifying only though, so there may be more female pups out there that I’m not aware of, but there are definitely some!

As a kid I used to ask older relatives to put a belt round my neck and take me for a walk; I asked a furry if this meant I was one of them but perhaps that’s more of a human puppy behaviour. What do you think?

Hmmmm, I’m not sure if it works like that! But, you never know! The only way I’d say you’d know for sure is if you try pupping out some time and take it from there! Everyone in the community is very welcoming, so why not give it a go some time and see if it’s something you enjoy?