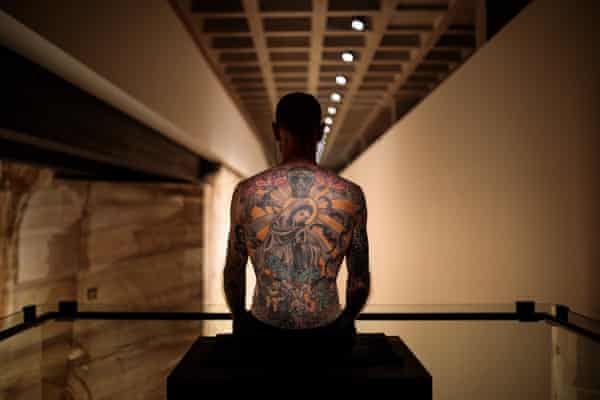 A Tasmanian man who has spent every day since 2011 sitting on a plinth at the Museum of Old and New Art (Mona) in Tasmania, Australia (well, except on Tuesdays when the museum is shut) is persisting with his exhibition during quarantine, even though he’s completely alone with no other staff or visitors around.

The ‘artwork’ is actually the idea of Belgian artist Wim Delvoye, who tattooed the subject’s back in 2008 then took him on a museum tour around the world before settling in Mona in 2011. According to the Guardian, the artwork was sold to German curator Rik Reinking for €150,000, with the subject – known only as Tim – collecting a third of the sale price. When Tim eventually dies, his skin will be removed and preserved as a canvas. Yikes.

Mona has been closed for over a month but Tim still shows up, just like all the nurses and doctors and other essential staff around the world. Gotta admire the dedication at least. Especially since no one can even visit him. Not to worry though, you can still watch him on YouTube:

Riveting stuff. Just sitting there completely still and in silence for 6 hours every day. I mean can’t he just work from home? It’s not really much different than what all the rest of us are doing in lockdown and he can still livestream it on YouTube if he wants. I promise no one will complain if he decides not to sit in an empty museum by himself for 6 hours every day.

What do you think he’s even thinking about the whole time? Is he allowed to get up and use the toilet or grab a drink if he gets thirsty? What if he gets a really strong itch on his nose? If you’re not asking these questions then I guess you don’t understand modern art.