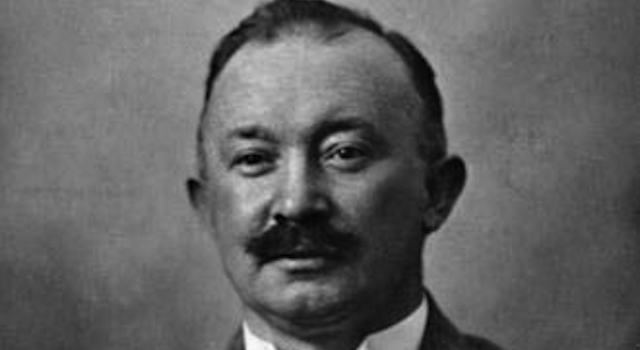 We shed some light on Hugo Boss and the allegations that he was a Nazi.

Chances are, you probably heard about this topic in September of last year when Russell Brand famously took to the stage to collect a gong at the GQ Awards, and used his time on stage to give a little impromptu set, cracking insulting gags (that were comical, let’s be honest) towards Hugo Boss – who had spent big in order to sponsor the event – and its past association with the Nazi Party. Of course, the boys at GQ weren’t at all impressed and poor Russell was kicked out of the ceremony.

The issue is shrouded in about as much controversy and debate as Mario Balotelli’s football career, so allow me to shed some light on the situation.

First of all, I just wanna dispel the myth that Hugo Boss designed the SS uniform; that was one of the few things that he actually wasn’t guilty of.

Hugo Boss established a clothing factory in his hometown of Metzingen in 1924, and began producing practical clothing and uniforms for the police and postal service. Sounds innocent so far, doesn’t it?

But another of his first clients was a certain Rudolf Born who contracted Boss to manufacture some garments for a relatively small-time political group by the name of the ‘National Socialist Party’ or the ‘Nazi Party’ to you and I. However, Germany’s economy went a bit Pete Tong in the late 1920s, and Boss went bankrupt.

Boss, being the determined fella he was, managed to strike a deal with his creditors and began his business again on a smaller scale in 1931, which is the year that the story becomes all the more murky. Boss became a fully fledged member of the Nazi party in April of that year, two whole years before they even came to power.

By the time the Nazis came to power, Boss was advertising in national newspapers about his production of SS, SA and Hitler Youth uniforms, as you can see below.

After Germany were defeated by the mighty Allies, and Nazi members alike were being tried for their horrific atrocities, Boss was deemed by the courts as an active supporter of the party, meaning he was stripped of his right to own a business and vote, and was fined heavily. But the tenacious businessman appealed successfully against this verdict, and was classified as a mere ‘follower’.

However, Boss died just three years later, leaving behind his business and a smoggy cloud of disputation in his wake.