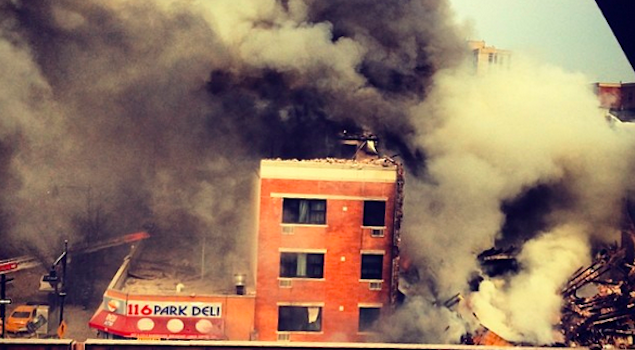 This happened literally an hour ago and nobody really knows what’s going on about it yet but here are 5 quick bullet points about what’s going down.

We’ll inevitably update you later on with more pictures, conspiracy theories (people are saying it was a gas leak but you know there’s going to be the inevitable terrorist/false flag links) and whatever else we can think of but for now here’s the immediate information and we hope that everyone over there is OK, especially the 11 people (at the moment) that have been hospitalised.

2. The Fire Department And Emergency Services Have Responded And Are Currently Surveying The Area

They were quick to respond and are trying to get a handle of the situation.

3. Smoke Is Completely Covering The Area

Here’s some footage from Instagram/Twitter.

Can see fire from my bedroom in Harlem. Crazy scene from what I can tell. #harlem pic.twitter.com/y6VGuFCfhm

4. 11 People Have Currently Been Hospitalised

This was according to ABC news around 10:30am EST.

Check out some of the pictures below from people using various forms of social media in the area. Although it probably doesn’t affect too many people reading this, the Metro service has also been suspended in and around the area.

â˜› More Explosions: All 2000+ Nuclear Explosions Ever In One Video

#repost from multiple Instagram accounts: a much closer look at the explosion zone #harlem pic.twitter.com/SzFKex9DHL

We have reports from East Harlem that Precious attempted to twerk on a rooftop. pic.twitter.com/B1WbQHLBhj