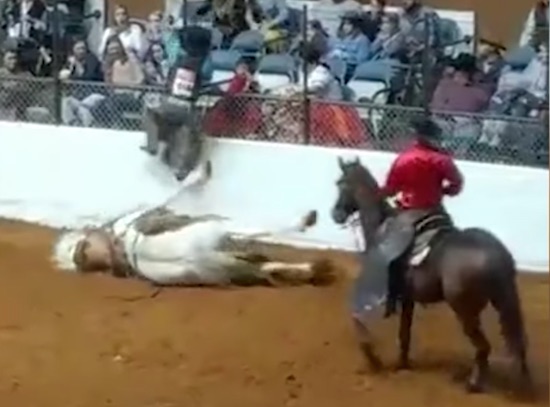 Bullfighting is often condemned by the majority of the world for being completely and utterly barbaric, but I think that you’ve really got to include rodeos in that narrative as well and the footage below shows us why.

Taken at a Texas rodeo over the weekend, the video features a nine year old horse named Treasure dying instantly after she bucks straight into a wall head first, just as the 8 second buzzer sounds. It’s pretty disgusting watching her body go completely limp as all the cowboys gather around behind her – too little too late. So if you’re not into watching animals die then please don’t watch it.

Ugh. So pointless and disgusting. I can’t really comprehend why people even want to compete in that or find it entertaining to watch, but I suppose I’m not cut from the same grain as people from the American deep south.

I doubt anything is going to happen about it any time soon, but hopefully sharing this video will encourage people to boycott events like that so they eventually go out of business. We can but hope.

For more rodeos, check out these guys zorbing with an angry ass bull. Morons.