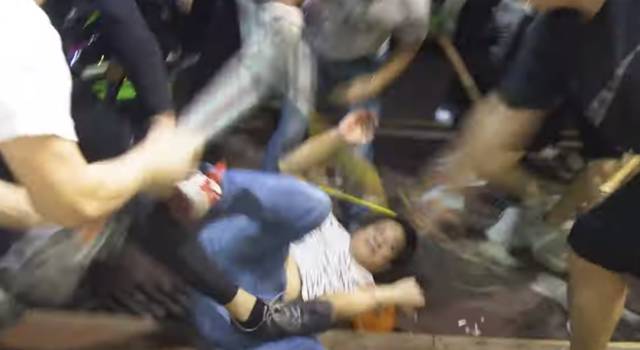 The anti-government protests in Hong Kong are STILL raging on three months later, following the announcement of a controversial plan that will allow criminal suspects in Hong Kong to be extradited to mainland China.

You can watch these Triad bell-ends beating up female journalists and pretty much everyone in sight HERE.

Well anyway, the Triad violence hasn’t done much to deter the people of Hong Kong from protesting in the streets, in fact it has wound them up even more. This week a bunch of protesters managed to corner two Triad members who found themselves separated from a much larger group of Triads, and one in particular got caught on camera receiving the beatdown of a lifetime.

Wow, he got utterly fucked up there didn’t he? Props to the camera man for catching all the chaos beautifully.

Looks like the people of Hong Kong aren’t about to let mainland China take control of them or assert any laws that they’re not happy with. Like any nation or territory seeking independence, they see what the Chinese government is trying to do and are ready to go to war to prevent it. Fair play to them.

For more Hong Kong violence – get a load of what happened to this guy after he started yelling Avengers spoilers outside the cinema.