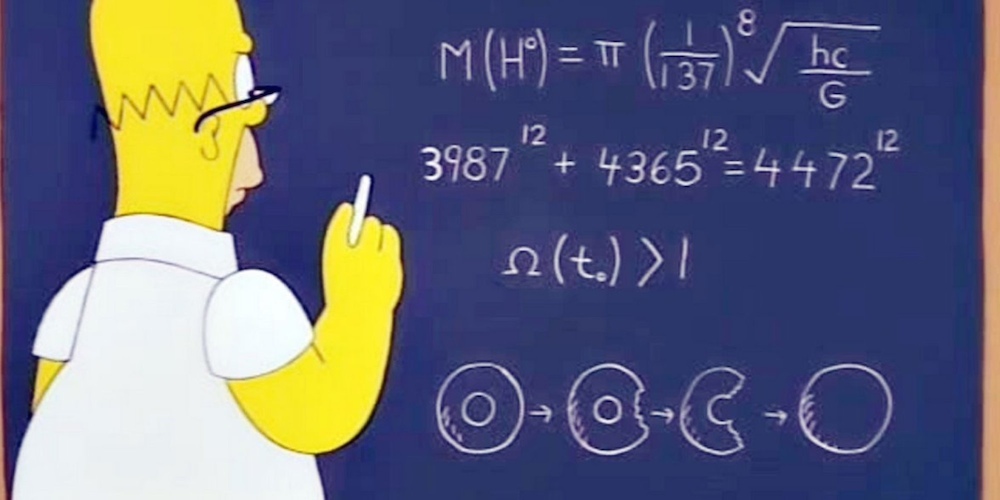 Turns out a diet of beer and doughnuts does stimulate your brain after all.

It’s being claimed that Homer Simpson devised the formula that proved the existence of the elusive God Particle a whole 14 years before the scientists in the CERN hadron collider were able to do so at a cost of £8.6 billion. If you don’t know what the God Particle is then make sure you read our easy to understand guide to it before continuing. Basically though, it’s one of the most important discoveries in history apparently.

Dr Simon Singh – who is writing a book that examines the mathematical formula used during The Simpsons for some reason – says that an equation written on a blackboard in front of Homer from the 1998 episode ‘The Wizard Of Evergreen Terrace’, in which Homer becomes a master inventor, correctly predicts its existence. Here’s what Singh had to say about the whole thing, which is a fairly extensive commentary:

The equation precast the mass of the Higgs boson – the God Particle.

It’s kind of amazing as Homer makes this prediction 14 years before it was discovered.’

One of the equations relates to Fermat’s Last Theorem, and my first book was about all about this notorious equations, so it leapt out of the screen. 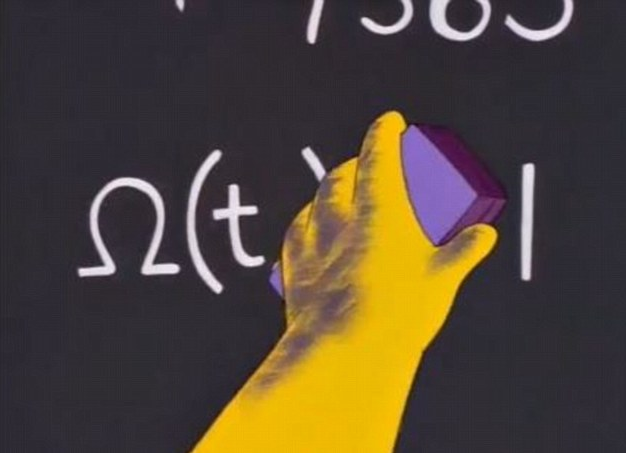 My PhD is in particle physics, so I was similarly shocked by Homer’s equation predicting the mass of the Higgs boson.

The equation is a playful combination of various fundamental parameters, namely the Planck constant, the gravitational constant, and the speed of light.

If you look up these numbers and plug them into the equation, it predicts a mass of 775 giga-electron-volts (GeV), which is not unreasonably higher than the 125 GeV estimate that emerged when the Higgs boson was discovered in 2012.

Indeed, 775 GeV was not a bad guess bearing in mind that Homer is an amateur inventor and he performed this calculation fourteen years before the physicists at CERN, the European Organization for Nuclear Research, tracked down the elusive particle.

I don’t really understand all that physics mumbo jumbo but I do think it’s hilarious that Homer Simpson managed to discover the formula 14 years before a billion pound operation was able to. The inclusion of the maths equation is down to producer and writer David X. Cohen who actually studied physics at Harvard university and was a gifted mathematician.

He would often smuggle in maths reference to episodes and this is actually inspired Singh to write his book. With this particular formula, David called up an old high school friend  David Schiminovich – who is now an astronomer at Columbia University – and they came up with the equation that delivered the best answer for the question of the God Particle in the time that they had to devise it. Turns out it wasn’t far off eh? Maybe Cohen should sack in the day job and become a full time mathematician.

Now what other mysteries can Homer Simpson solve? Provided he hasn’t been in a coma the past twenty years of course.