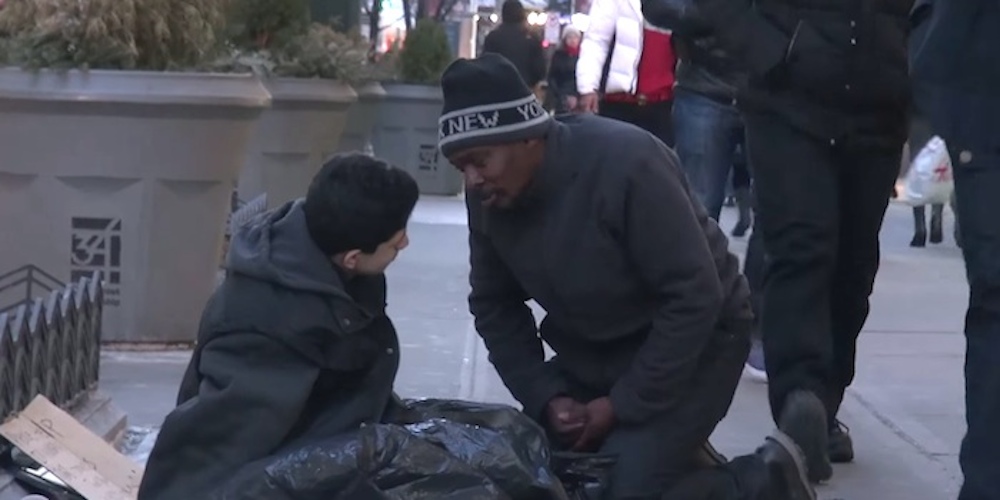 Is this a true representation of the generosity of the human heart, or just another fake viral video doing the rounds?

Maybe it’s because I’m cynical but I always wonder if these videos are real – especially after the Josh Lin homeless guy video over Christmas – because it’s pretty easy to edit something like this to get the result you want, so that you know, it goes viral and you make loads of money.

The premise of the video is fairly simple: a boy in raggedy clothes is freezing and asking for money on a sidewalk in New York City but gets so cold that he has to get inside a bin liner to try and stay warm. Nobody helps him until an actual homeless guy runs over and starts talking to him and gives him his jacket. Then the camera crew pop out, tell him the truth and give him some money as a reward for being such a great dude. It’s all very heartwarming and nice and makes you feel fuzzy inside because it’s fairly well made with dramatic music and nice quotes etc, but can we be sure it’s real as it really wouldn’t be that hard to create this scene, would it?

However, having said that there is a substantial part of the video where there are a lot of people walking past the homeless kid freezing on the street and not helping him out at all or even looking at him, so that part is fair enough but I mean there is a whole two hours worth of footage that we don’t get to see where people might have stopped and helped him. There’s also no guarantee that the homeless guy in the video is even a real homeless guy and not just an actor, although he does seem pretty genuine in this video. That’s what good actors do though.

Still, it’s nice to believe that people who have nothing can be this generous when others are in need and I’m hoping it’s true., it’s just a sign of the times that it’s not that outrageous to think that someone might have fabricated this video for their own gain.