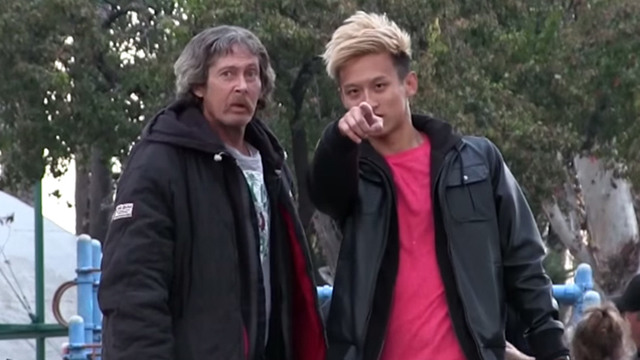 Well, this is disappointing.

The other week, a guy named Josh Paler Lin shared a video in which he “secretly filmed” a homeless man using $100 Josh had just given him to buy food for others. The seemingly selfless act went super viral and generated over $130,000 on a donation page set up by Josh for the homeless guy.

According to someone who saw the whole thing go down however, the homeless star of the video “knew he was being followed” and the “whole thing was bullshit”:

As written by ‘Vocativ’ who spoke to witness Taugan Tan Kadalim:

The 26-year-old says he stopped at the store to buy a lottery ticket before picking up his girlfriend, who lives in an apartment complex directly across the street. As he was walking out of the liquor store, Kadalim says he spotted Lin sitting in the driver’s seat of a nearby vehicle and recognized him immediately from his previous prank videos. “I was like, ‘Oh my God, it’s him,” says Kadalim, adding that he subscribed to Lin’s YouTube channel. “I couldn’t believe it.”

A cameraman sat in the passenger seat of Lin’s car, and behind him was the man who Kadalim would later recognize as Thomas, the homeless Samaritan Lin claims was secretly followed with a hidden camera. Thinking the three men were about shoot a prank video, Kadalim decided to stick around and watch.

Obviously, it’s not the first viral YouTube video that’s been staged or the last, but it’s pretty disappointing considering the content and how much we’d like to believe it was real.

Here’s Josh Paler Lin’s response, for what it’s worth:

There is is no way we’re making this up. This is real.

Whatever you say mate.