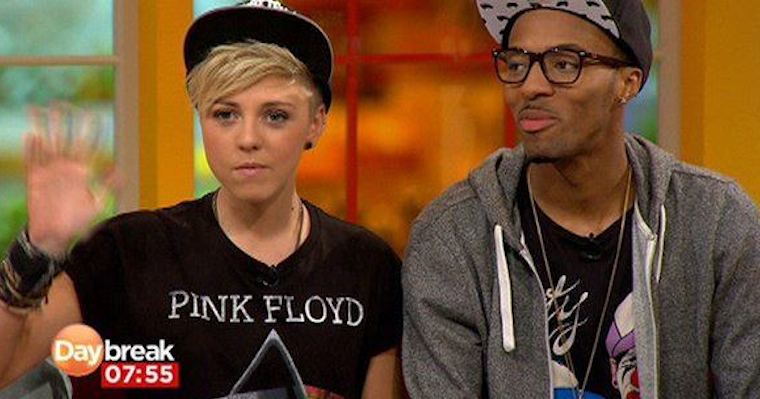 What’s the best way to get over being kicked off X Factor? Probably to go out partying all night and then rollover and go into a TV interview and gurn your face off. Step up MK1.

Somehow I’ve managed to totally escape hearing anything about the X Factor this year. I’m not sure why – hopefully it is losing its popularity but it could just be because I don’t have a stupid girlfriend this autumn who is making me watch it all the time. Yeah so that means that I have absolutely no idea who MK1 are or what their story has been since they joined the show, other than the fact that they got kicked off on Sunday night and did an interview on Daybreak (I don’t even know what that is either but I’m guessing it’s some early morning ITV current affairs show). This is more than enough to make me a fan of them though.

Why? It’s because they’re gurning their faces off in the interview. Like the black guy (sorry I don’t know his name OK, I’m not trying to be racist or anything though) can’t help himself at all and is completely going at it whenever he isn’t talking. It’s some of the worst gurning I’ve ever seen, like it looks like he’s actually chewing gum but there is no way any in his mouth at all. The girl holds it together slightly better than him but is only too willing to admit that to deal with getting voted off X Factor she went out partying all night and hasn’t been to sleep.

There are also a couple of answers to questions as well that totally give the game away. The girl says that the thing she’ll miss the most about being on the show is the fact that she’ll really miss hanging out with her ‘best friends’ every day because, despite what the papers says they all actually are really, truly, best friends. She also said that there were a couple of labels sniffing around them, which is the kind of thing aspiring musicians only ever say when they’re really wasted/high and they’re always exaggerating the amount and level of interest because they’re trying to make themselves feel more secure about the fact that the only prospect they have is a one line email some guy sent them about a week ago.

So yeah enjoy the video below and don’t even try and tell me with a straight face that these two aren’t completely mashed up: