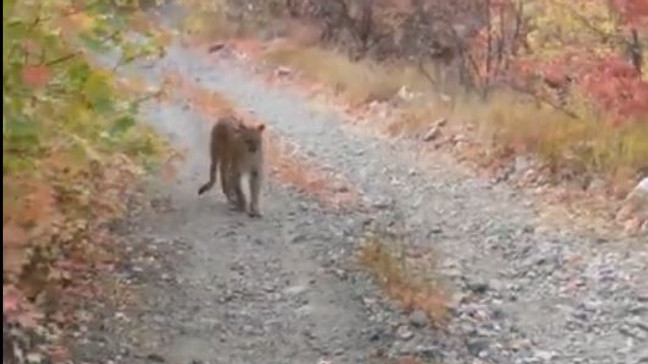 I can’t say that I’ve ever been too scared of the possibility of a cougar stalking me for six minutes whilst I’m on a hike because I’ve never really thought it might happen, but having watched the video below it’s definitely something I don’t ever want to be involved in.

26 year old Kyle Burgess was out hiking at Slate Canyon in Utah when he saw a bunch of cubs ahead of him, closely followed by their mother who was not happy to see him. The cougar then proceeded to stalk Burgess for the next six minutes as he walked along the path, occasionally hissing and lunging at him before eventually leaving him alone.

Burgess filmed his entire experience and is thankful that it wasn’t the end for him as he was very aware of the fact that the cougar could quite easily have taken him out if it had wanted to do so:

I didn’t really know what kind of cubs they were or what animal they were.

Once I did realise what they were, I was like, ‘That’s mom right there. I’m screwed.

My emotions were a jumbled mess.

So it was kind of like, ‘OK, well this is going one of two ways. What’s the outcome going to be?’

Thankfully for Kyle it all turned out alright in the end and he’s been commended for his actions by the park ranger, who said that making yourself bigger, making a lot of noise and never turning your back on the cougar are all the key parts of making it out of the situation in one piece. Some good pieces of advice to keep in the back of your mind in case you ever find yourself in a similar situation – more common than you might think apparently.

For more of the same, check out this man with a broom fighting an angry racoon. One for the ages.