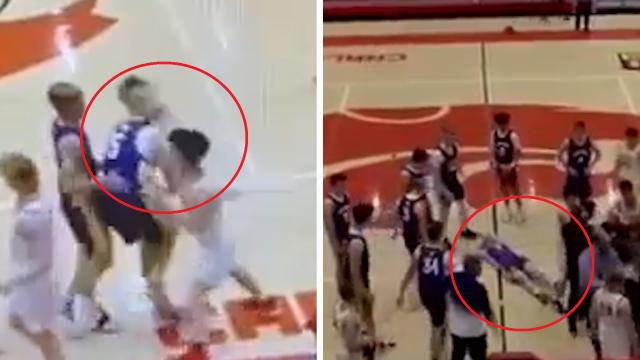 Wow, what was that about? All I know is that if I’m on a basketball team taking on Carlisle High School anytime soon, I’ll be sure not to get on Number 4’s bad side (assuming he wasn’t immediately expelled from the team after this). As you might’ve guessed, Carlisle lost the game to Nevada High School by 72-47, which is basically a thrashing. Obviously this lad took exception to something that happened during the course of the game and decided to get payback during the post-game handshake line.

What’s really alarming about it is how obviously premeditated it was. This kid remained calm all the way until it was time to shake his target’s hand and then completely blindsided him with a punch to the gut followed by a knockout blow to the chin. A proper little psychopath in action. What a horrible way to conduct yourself.

It’s a shame the adults were so slow to react and respond, but let’s hope the victim suffered minimal damage and that the assailant is punished appropriately. Would’ve been nice to have the next 10 or so seconds of that video too to see if anyone avenged the lad. Gonna be a big game the next time these two sides play each other.

For a look at Michael Jordan’s Bulls-era mansion which is currently on the market, click HERE.