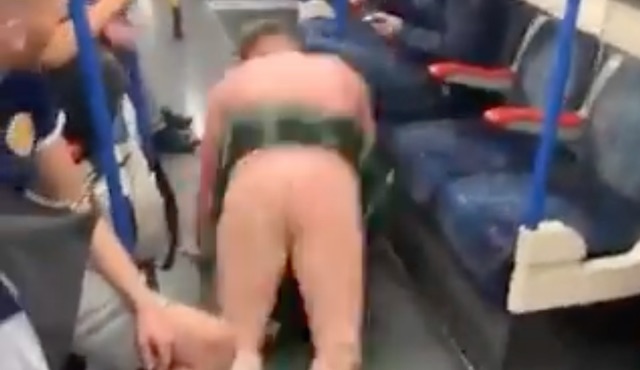 It’s only a few hours until one of the biggest games in Scotland’s history as they prepare to take on England at Wembley in Euro 2020 and the Tartan Army has descended on the nation’s capital to get pissed and cause trouble.

We already shared a picture of a naked Scotland fan getting arrested yesterday in Hyde Park and now here’s another video of one of them trying to do the worm on the tube and exposing his willy to the whole carriage – he’s wearing a kilt – because he’s so pissed. Obviously there are some graphic images here so don’t bother pressing play if you don’t want to see the idiot’s ding dong:

Lol what an absolute moron. Like I said in that earlier post I can imagine myself getting excited about a lot of things – I’m certainly pumped for tonight – but I don’t think anything could ever make me want to get naked in public on a busy train in the middle of the day. Again, maybe I’m just really frigid and doing it wrong though? Who knows?

For more of the same, check out the naked fan getting arrested in the park. Bit embarrassing to be honest.