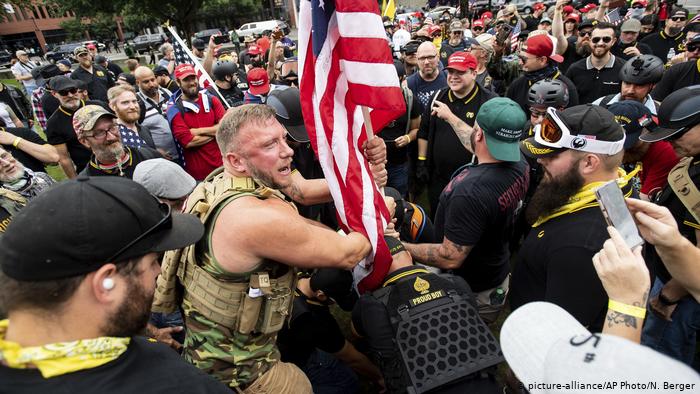 It’s been well documented that there was a bunch of violence in America over the weekend as the MAGA crowd marched on Washington to convey just how pissed off they were with the election result, which in turn led to a bunch of scuffles with BLM/Antifa protesters.

It turns out that this was happening all over the country though as well, as a bunch of videos that have been posted to Twitter from locations such as New York and Portland seemingly show a bunch of Proud Boys violently attacking journalists and other rival protesters and speakers. There doesn’t seem to be any motivation for these attacks either other than the fact that they represent different ideas to the Proud Boys, but take a look at a few of them below and see what you think:

Proud Boys attack a journalist in Portland, throwing him to ground and kicking him in the face. 📸 @PDXzane pic.twitter.com/BcBUV9OWaB

Proud Boys in NYC attack a woman, lunging to get past the NYPD who warns them to stop instigating. 📸 @itsa_talia pic.twitter.com/VEppNpmrcO

OK, so those clips are very short and don’t really give you any context of what’s going on, but it certainly looks like the Proud Boys are just starting on everyone for no reason. In fairness to the Proud Boys here, I’m not really sure why they would want to attack journalists for just doing their job – surely they would want people to know they were protesting and how mad they are about the election results? – so maybe there’s more to it?

The other possibility is that the Proud Boys are just so pissed off with how they’re being portrayed by the fake news/lamestream media that they’re just attacking them straight away whenever they see any of them. Again, that doesn’t really make much sense but neither does the whole Proud Boys movement to me so what do I know?

As for attacking the speakers and random protesters, I guess there may be some reason for that but I’m not really sure what could validate those actions for me. The footage certainly doesn’t make the Proud Boys look great though. Happy to hear some explanations if anyone has them.

For more of the same, check out this completely lame Proud Boys imitation ceremony. Surely this can’t be real?