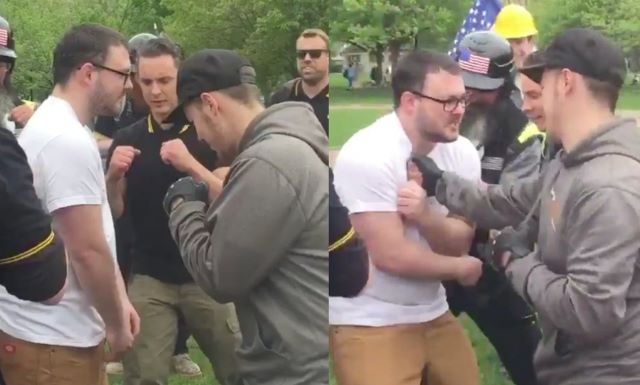 What did I just watch?

Washington DC turned into a bit of a battleground between pro-Trump groups like the Proud Boys and the BLM/Antifa crowd this weekend, and in response someone has shared this video showing a Proud Boys initiation ceremony which makes them look like a proper bunch of wallies.

Just get a load of this cringe overload:

Try not to to laugh… pic.twitter.com/4IsqdOKjrA

Wow, that’s a level of toughness that just cannot be beat. Genuinely thought that was a parody someone put together to make the Proud Boys look like pussies, but nope – apparently it’s the real deal. The Proud Boys initiation ritual involves “getting the crap beaten out of you” by the 5 dudes with zero punching power while you list 5 breakfast cereals to escape being tickled to death. Sounds more like some weird frat house activity than a bunch of pseudo-masculine men trying to make America great again or whatever.

The group’s founder, Gavin McInnes, explained the ritual himself back in 2016:

You must get the crap beaten out of you by at least five guys until you can name five breakfast cereals. f you hammer out, ‘Chex, Cheerios, Rice Krispies, Corn Flakes, and Special K’ in a matter of seconds, you’re free to go. If you get flummoxed by the punches and cannot think straight, well, sorry, you’re going to get pounded.

Again, I’m looking for any suggestion that this is a pisstake or satirical sort of thing but apparently it isn’t. You could say that at least the Proud Boys aren’t going around smashing windows, looting shops and setting cars on fire like their opposition, but still, this is a pretty embarrassing alternative. Is there any politically-charged group in America that isn’t a complete joke?

Especially when compared to some of the more horrific gang initiations out there – like eating a human heart. Proud Boys could never.