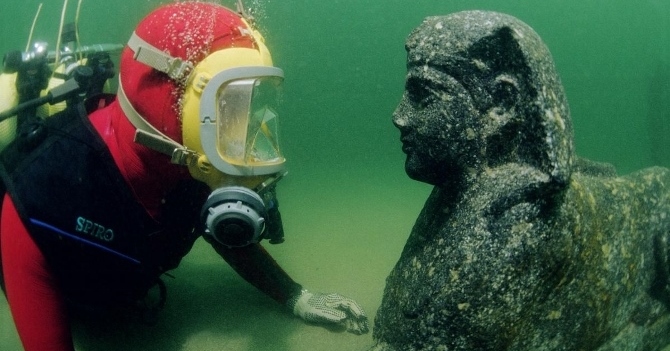 Heracleion, an ancient Egyptian city, was swallowed by the Mediterranean Sea 1,200 years ago. But now it’s been found again, and it’ll blow your mind.

Okay, so this is pretty cool and it’s definitely something that smacked my interest right in the tits. I’ve always been interested in things like lost cities and ancient civilisations and the old world and ghost towns because I’m pretty much a secret geek but Atlantis, Pompeii, Ys, Deception Island, Pripyat, the Aztecs and the Egyptians are all really legit stuff that everyone should learn and know more about because it’s all part of our history, y’know? All tangled together in one long, stretchy wall that starts at the beginning and ends where we are today, at this specific minute and this specific second.

So, yeah. Back in 2000, a city called Heracleion (that’s what the ancient Greeks called it, the ancient Egyptians knew it as Thonis) was rediscovered under the Mediterranean Sea by a dude called Franck Goddio who is an underwater archaelogist. The city was found after a 4-year survey where Goddio, and a team from the European Institute for Underwater Archaelogy, conducted loads of geographical and physical tests to confirm whether Heracleion was actually underneath the Mediterranean or whether it was just a myth that the city even existed.

Thirteen years later, after a hell of a lotta excavation work that reached 30 feet under the sand of the Mediterranean Sea, Goddio and his team have now unearthed one of the most intriguing, richest and startling finds of lost cities. From the evidence, they’ve realised that Heracleion was no normal city. It was used as a vibrant, important, international trading hub and was a mandatory port of entry for traders between the Mediterranean and the Nile, and it was also possibly used as a vital religious location.

So far, the haul has been 64 ancient shipwrecks, more than 700 anchors, gold, giant tablets that are inscribed in in ancient Greek and ancient Egyptian, 16-foot stone sculptures and sarcophagi. All of these findings, plus the other minor findings, point to the possible conclusion that Heracleion was one of the busiest ports and one of the most alive and colourful cities in the world. Experts have suggested this is what it might have looked like back in the day: 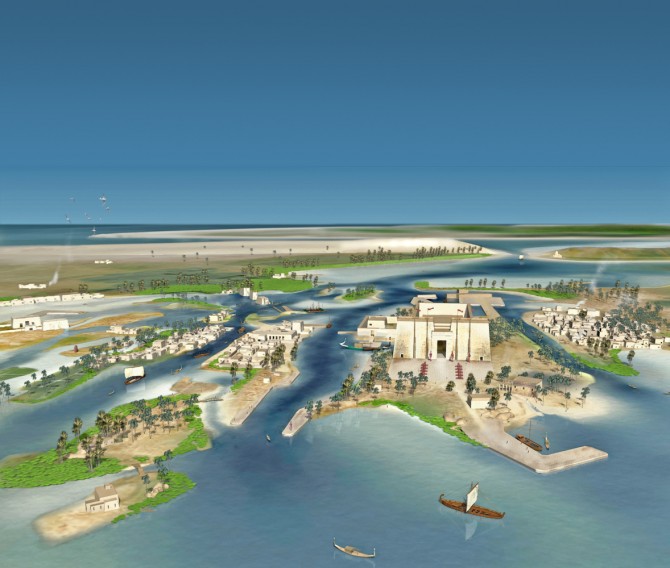 Despite the findings being hidden under the ocean for 1,200 years, they’re in a well-preserved condition which has made the haul that much more fascinating.

The reasons that have been suggested for the city sinking into the sea all those years ago range from the weight of large buildings on the water-logged sand and clay that the city rested on, to an earthquake causing the soil to collapse into the depths. But no-one really knows, we’ll just have to wait for Goddio to conclude his findings.

Here are some photos of Heracleion, and the findings, and some videos from the divers’ POV. You can find more photos on Goddio’s website by clicking here. 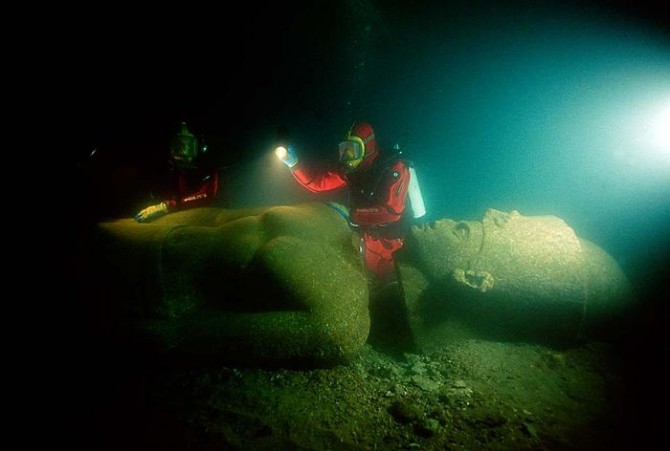 Check out a full gallery of pictures and some videos on the next page: