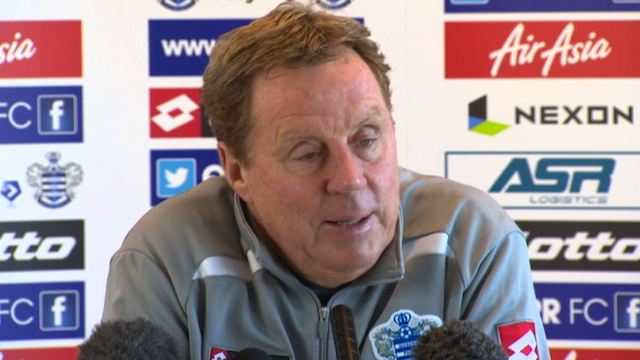 Whoever at QPR thought it was a good idea for Harry Redknapp to do a Twitter Q & A session is obviously a complete moron.

QPR manager Harry Redknapp took to Twitter today to perform a Q & A session and as you would expect given his image as a wheeler dealer geezer there was a high amount of trolling, perhaps even more than the usual amount that celebrities get when they take to Twitter to take part in these sessions. The guy trawling through them to find a genuinely serious question probably deserves to be paid overtime because he had to go through so many useless tweets to find ones that were actually worth asking.

We’re not interested in the ones worth asking though, we’re only interested in the banter. Here’s some of the best tweets from #AskHarry, mainly looking at the dumb ones and not all the ones calling him a fat wanker, although we have included a couple of those just for lolz obviously.

Why does it take you 8 films to finally kill Voldemort? #askHarry

#AskHarry if Daniel has 5 apples, and he sells 3 apples, how much cash does Daniel take as a backhander?

#AskHarry could be the highpoint in Twitter’s existence. Brace yourself.

#AskHarry How difficult was it going over Niagara Falls in a barrel dressed as a woman? pic.twitter.com/TtKdwkYRZX

#AskHarry How highly do you rank this game in your career? pic.twitter.com/gFnIx5S7Hr

How did it feel to be immortalized as a cartoon character? #AskHarry pic.twitter.com/VgGg0JSQW3