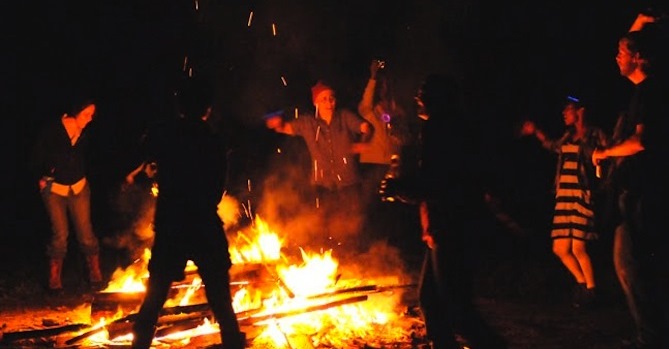 When is a Harlem Shake video worth posting these days? When it goes spectacularly wrong – like this.

Nobody likes a Johnny-come-lately, especially one that’s trying to revive a viral dance craze that’s well past its prime. But if you insist on uploading your own version of the Harlem Shake in April and expect anyone to still give a shit, you better incorporate something drastic and exciting into your routine, like — oh I dunno — falling into a pit of fire? Bonus points if you come out unscathed.

Which is why this video of some German dude turning himself into a flaming, dancing Nazi is worth the post. As is custom, the team of dancers go batshit when the beat drops, only one of the adults gets a little too keen and stumbles backwards right into the raging bonfire behind them. The kids quickly recoil in horror but luckily, the other man is quick to drag him out (and carry on dancing), and it turns out the guy only suffered a few blisters.

So what went wrong? Was it an accident? Punishment by a higher power?  A lesson in Darwinism? Who knows — pretty crazy as far as Harlem Shake videos go though.

Coachella Rave Dad Is The Best Thing About Coachella

Breakdancing In The 1890s