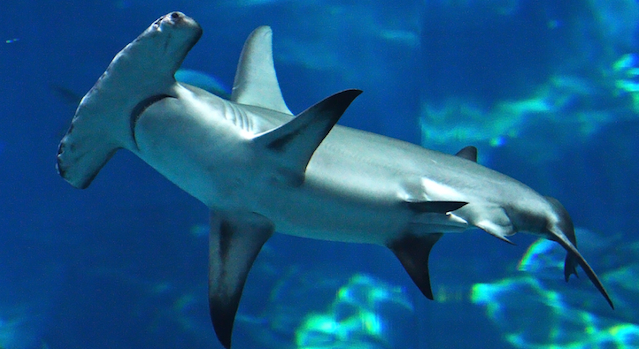 I have never really considered what a shark giving birth would look like but this video has completely changed all that as now I know exactly what it looks like. It’s weird.

Sharks giving birth and how exactly this happens hasn’t ever been something that has really ever crossed my mind but as soon as I saw this headline on an article whilst I was surfing the internet I knew I had to check it out immediately. There were so many questions: namely – ‘how the hell does a hammerhead shark give birth in the first place?’ and ‘what the hell does it mean ‘stunned into giving birth?’

Thankfully this video kinda answers both of these questions. It was filmed yesterday at Panama Beach in Florida and it turns out that when a hammerhead shark gives birth loads of little hammerhead sharks just seem to fall out of it and then swim off like it’s not big deal. I think the stunning part is the fact that some fisherman dude pulled it out of the water and holds it by its tail while all these little dudes fall out of it onto the beach and swim off.

I’m not sure if the dude pulling it onto the beach is actually being safe because it’s better for it to give birth on the beach or not, but it does seem kinda cruel to me to pull it out and keep a hold of it while it’s thrashing around, especially as it turned out that the shark actually died shortly after this video was filmed. Bystanders said that a bunch of fisherman (including the one holding onto it) and coast guards tried to coax the shark back into the sea but it kept swimming back to the shore, so at least they tried I guess. Still, it’s pretty sad.

Don’t worry about the little sharks that it gave birth to first though – apparently hammerhead shark babies are very independent and often swim away from their mothers immediately after leaving the womb. They then fend for themselves in shallow waters away from predators until they’re big enough to head into the big bad ocean and start kicking some ass. So they’ll be OK, it still sucks that the main shark had to die though.

Dude Pranks His Mate By Pushing Him Into Shark Infested Water