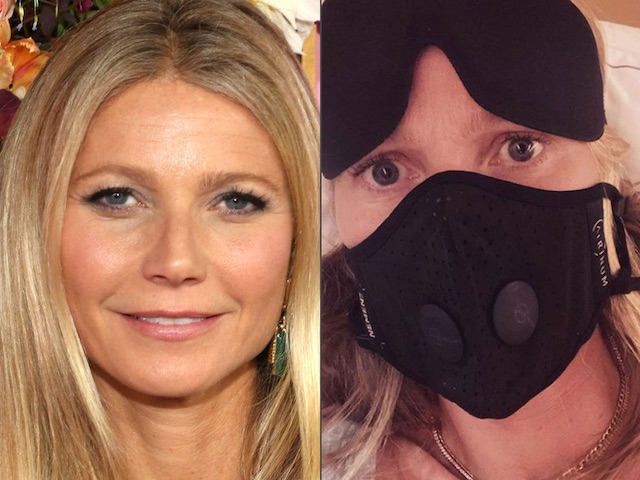 Face masks have become a necessary part of reality for most of the world over the past 12 months, but for some reason Gwyneth Paltrow has decided to come out and claim that she was the person that started the trend.

It’s easy to forget that masks weren’t actually mandatory in this country until around July – I guess it’s a similar date for other countries as well – and so Gwyneth does have kind of a point that she was ahead of the curve by picturing herself wearing a mask on a plane in February 2020, but is that something that she really needs to be bragging about? Not really sure why she would want to be associated with that, but nevertheless she doubled down on the claim in an interview with The New York Times, saying that this was just one of many cultural trends that she was responsible for.

Lol. Obviously this just made her seem like a massively self absorbed idiot and of course Twitter was quick to let her know this:

“i’m wearing a mask! i’m so ~weird and random~, but such is the life of a trendsetter ✈️✈️”

My favorite Gwyneth answers are “I invented that.” She told me that people do yoga now because she did it in the early 90s. But this one, a combo of “I invented masks” and also “I had COVID first” is a masterpiece, and I doff my vaginal egg in admiration. https://t.co/tB16STCZA9 pic.twitter.com/Yuh1cNcNMx

Seemingly not; likewise South Asian ppl, some of whose cultural practices she has also presented as a boujie lifestyle trend she singlehandedly set 😔 pic.twitter.com/GlprdK5gm3

gwyneth paltrow single-handedly caused covid so she could start a mask trend https://t.co/rn6nszfSkg

Probably should have worn it at the function as well Gwyneth if you’re so smart, then you wouldn’t have ended up catching COVID. Still can’t get why she’s claiming that she started the mask wearing trend – it’s such a strange thing to want to take credit for when pretty much everyone hates the way that face masks have impacted our lives over the past year and how many people have died because of COVID. Real weird flex from her, but I guess that’s just Gwyneth Paltrow isn’t it? So wacky.

For more of the same, check out when Gwyneth’s vagina candle exploded. That was a flex.