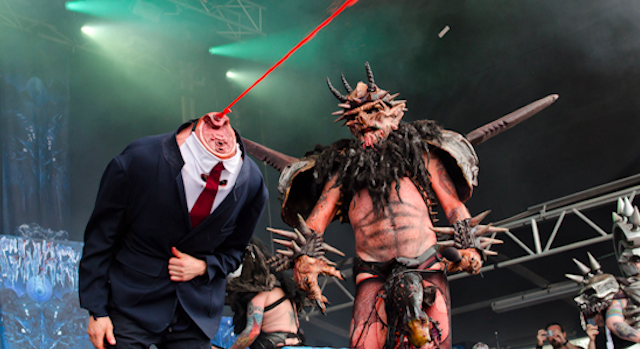 Metalheads Gwar seem to have the right idea when it comes to dickhead politicians.

Metal performers Gwar – known for their on-stage theatrical antics – managed to decapitate the Australian Prime Minister this weekend at this year’s Soundwave Festival in Brisbane, Australia.

The replica of Tony Abbott waddled on stage, looking similar to something out of Eraserhead and announcing in a whiny and badly impersonated accent that the show was over. This enraged the crowd, prompting front man Oderus Urungus to shank the PM with a giant sword, spraying a fountain of blood all over the front row and creating a segue to the next song. It was a brutal and comical display performed in true Soundwave form.

Photographers fled the pit, where blood sprayed from the PM’s headless body and getting dispersed fairly evenly all over the punters. It was a killer way to kick off the early hours of the festival, and judging by Tony Abbott’s track record, there isn’t a soul in that audience who didn’t get a boner watching him get his head cut off.

I somehow can’t imagine this same show going down well in North Korea.

Watch the brutal assassination below: