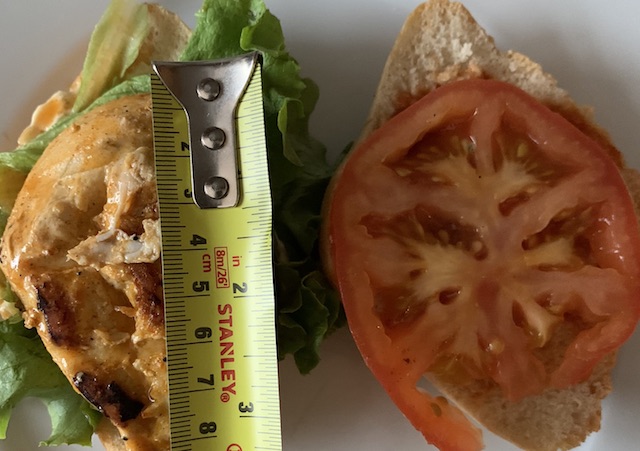 I don’t know how many times I’ve been out to eat food at a restaurant during my life, but I can guarantee that I’ve never once taken a tape measure with me during any of those experiences.

The same can’t be said of this guy Jason Kurensky though, as he apparently has nothing better to do on Father’s Day than to head to Nando’s with his tape measure and record the size of the piece of chicken that he’s received. Here’s the tweet:

@NandosUK this is appalling! Not even a 10cm piece of chicken for £6.75. I have been a customer for almost 20 years! The tomato slice is bigger! #HappyFathersDay #appaling #ripoffbritain pic.twitter.com/2D857QV8jL

Lol? What kind of a person actually does something like that? You’ve gotta be a special type of peculiar to carry a tape measure around with you everywhere you go and probably an even more special type of peculiar to deliberately take one with you to Nando’s because you think they’re going to sell you a really small pice of chicken. Not sure which camps Jason falls into here, but it doesn’t really matter because if he’s in either of them it means he’s a grade A bellend.

Funniest thing about it all is that Nando’s seem to have taken the whole situation rather seriously and have replied to the guy telling him to get in contact with them to sort it out:

Please get in touch here https://t.co/9m3ZaicyB6

Not really sure what they’re going to do there? Maybe offer him some vouchers or something? It would have been way funnier if the link had gone to a web page telling him to fuck off or something, but I did sadly click on it and it’s just their customer service form or whatever. Losers.

Anyway, hopefully this leads to a bunch of people taking tape measures out and seeing how big their Nando’s is and tweeting about it. Join the revolution.

For more of the same, check out when The Undertaker was spotted at Nando’s. Tombstone!