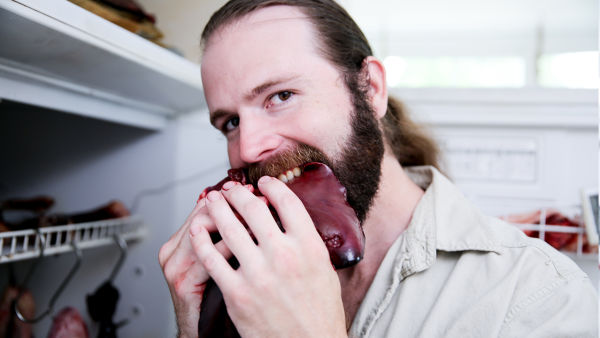 There are a lot of alternative diets out there right now – veganism has only really become mainstream in the last few years for example – but I think most of us can agree that the raw meat diet is one of the most far out around.

35 year old Derek Nance from Lexington, Kentucky would be quick to disagree with you though, as he’s survived on a diet fo raw meat and live maggots for the past ten years and says that he’s never felt happier. He eats all kind of animal meat raw including stomachs, spleens, livers and testicles and only refuses to eat an animal’s hooves or horns.

Even stranger is the fact that his girlfriend is a 60 year old woman called Janet who used to be a vegetarian. Whilst she does now eats meat, she hasn’t yet joined Derek on the raw journey, saying that she can’t stand the smell.

Here’s what Derek had to say about it all as well as a short video spot:

I was experimenting with so many different diets and nothing seemed to work. I was having so much trouble digesting everything else that meat seemed to work well for me.

Whenever I get a fresh animal in, there’s something about the fresh blood that just stimulates appetite.

Decomposed flesh is a part of a natural diet of almost every predator on this planet. There’s plenty of animals that you can see that scavenge.

The fermented flesh can releases certain bacteria that give the eater a sense of euphoria as they consume it.

I also enjoy eating live maggots as they contain an enzyme that aids the digestion of raw flesh – they’re essential to my diet.

I believe that the nourishment that are in raw animal foods is far superior than the baby foods.

There are certain nutrients that are in raw flesh that get cooked out – there’s trace amounts of vitamin C, the vitamin A and the B vitamins.

I mean sounds like Derek’s convinced of their benefits even if nobody reading this is. In fairness he did have a bunch of eating disorders when he was growing up and couldn’t digest a lot of stuff, so maybe this is the best diet for him.

I’m not sure whether he should be imparting it on his kids though – surely they should stick to more conventional methods and see what works for them rather than having to follow their freaky dad’s weird diet? Wonder what Janet has to say about it all?

For more of the same, check out this story about a weird guy going around dropping raw meat out of his cloak in North Caroline. Weird.