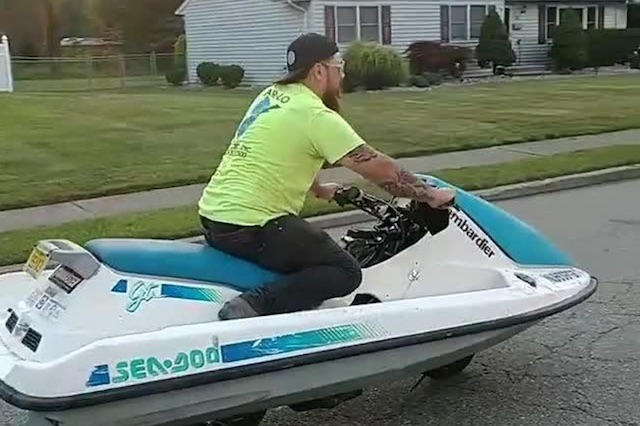 Every now and again something so outrageous comes along on TikTok that you can’t help but look at it and wonder what the hell is going on in the world – and this is another one of those times.

You’ve obviously already seen the headline and the picture and that’s why you’ve clicked on the article, but you might as well try and go into watching this TikTok with an open mind as there’s absolutely no way you would except this dude to rock up on a jet ski in it. The way it happens is like it’s just the most natural normal thing for the guy to be doing, when it’s clearly nothing of the sort whatsoever.

Lol what the hell is that all about? Well, thankfully the husband Nick Temple has decided to upload another video where he explains how modified the scooter with the body of a jet ski and is calling it a ‘Scootski’.

Oh right. And there’s also a news segment from last year where he explains how the Scootski is actually street legal over in California:

Now the only question really is why this guy wants to ride a jet ski like it’s a motorbike? Surely one of the best parts of driving a badass motorcycle is that you ooze sex appeal and everyone thinks that you’re one of the Sons Of Anarchy or something, so why would you want to give that up to ride around like a cartoon character on a jet ski? Answer me that Nick Temple.

For more of the same, check out these two guys who got caught on a jet ski with £200,000 worth of cocaine. Dang.